A night for Number Four: Favre goes into Packers Hall with a flair 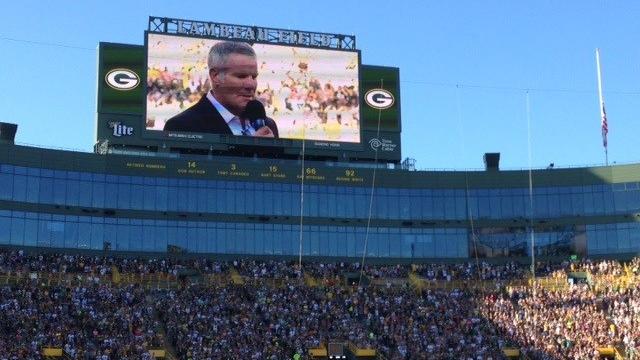 Brett Favre is, now and forever, a Green Bay Packer.

Favre went into the Packers Hall of Fame Saturday night, capping a day full of press conferences, ceremonies and overwhelming waves of support from Packers fans who packed the stands at Lambeau Field to watch Favre walk onto the field one final time.

Favre thanked the fans many times over, showing the emotion of a man happy to be reunited with the franchise and city he left in 2008 amid some controversy to join the New York Jets. Favre later played at Lambeau as a member of the Minnesota Vikings, but says his appreciation is deepest for Green Bay.

\"I have people say how can a boy from Southern Mississippi come to Green Bay and play in that cold weather. If you truly love the game, you play it no matter what,\" said Favre in a press conference Saturday afternoon before the night's festivities began. Favre was surrounded nearly all day by some of his closest friends during his Packers time, a group that included Mike Holmgren and Ron Wolf, Favre's coach and GM for many of his best years in Green Bay.

\"Best player ever to play for the Green Bay Packers, Brett Favre,\" Wolf said Saturday. \"I say that because when I came here, I had some people that I was very fortunate to work with who covered the Packers in the 30s, the 40s, the 50s, through the Lombardi era, and they told me the same thing.\"

Current Packers president Mark Murphy said he couldn't think of a player who has had a larger impact on a team and an organization than Favre. Mike Holmgren recalled having a few reservations when Wolf traded a first round pick for Favre, then a backup with the Atlanta Falcons. Those reservations quickly vanished.

Favre played for the Packers from 1992-2007, making nine Pro Bowls, three First Team All-Pros, and setting Packers records for passing yards, completions, and passing touchdowns. He stepped in for an injured Don Majkowski early in the 1992 season and started every game for the rest of his Packers career, totaling 297 consecutive starts. Favre won the NFL's Most Valuable Player award three consecutive seasons from 1995-1997 and led the Packers to two Super Bowls, winning one.

Favre will return in November as his name and number will be unveiled alongside Packers greats on the wall of Lambeau Field.