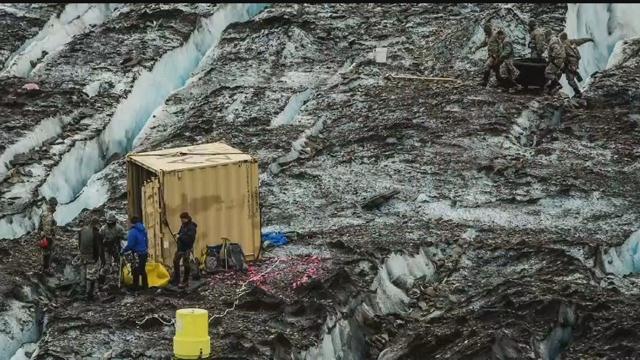 64 years after plane crash on an Alaskan glacier the remains of a Waukesha airman who served during the Korean War are finally returning home.

The remains are those of Thomas Condon - a Waukesha High School graduate who died in a plane crash on November 22, 1952. The plane was also carrying 51 other people headed to Elmendorf Air Force Base in Alaska.

Weather conditions at the crash site meant his body was never recovered or identified until now.

With a visitation and a funeral planned to start at 10 a.m. next Wednesday at St. Joseph's Catholic Church in Waukesha, family members are emotionally caught between past and present.

"Oh, he was just a great guy. A lot of friends. He was a really good ball player. And he loved to drive. He was an excellent driver," Thomas's younger brother Bill Condon said.

In 2014 when an investigator called him asking for a cheek swab to obtain DNA - at first he thought it was a scam.

"I was skeptical about this. I thought '62 years later you're telling me you're digging up something? Does somebody want something from me or what is this?'" Condon said.

The call actually came on behalf of investigators with 'Operation Colony Glacier' - a team going through and investigating the crash that killed his brother.

Since the site's discovery in 2012 the Air Force has worked to identify remains. It is difficult work because the site is so old but Bill can still clearly remembers the day he was told his brother went missing.

"It was a Sunday afternoon. A taxicab came with a telegram. And it said, well, he was missing then. So that's how we found out. My parents were away. It was a tragic time," Condon said.

"It's on a glacier, You know? And they only can search three months out of the year," Condon said.

But that challenging legwork combined with the DNA test led to a phonecall that's still shocking to Condon today.

"And he said 'Bill it's perfect. The match is perfect. It's unreal. It's lucky you were still alive because a lot of those people don't have any kin. And that was a miracle too right there," Condon said.

"And that answers our questions. Now we're all satisfied, we know. But we know that he's been in heaven for 64 years anyway," Condon said.

Condon's is 1 of 25 people identified  so far from that crash. His remains are scheduled to arrive in Milwaukee next Tuesday afternoon.