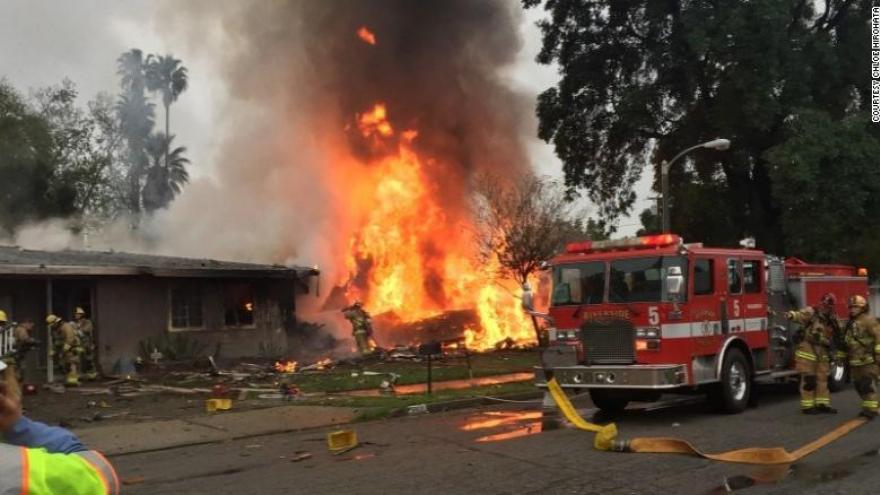 Previously, he had said that four people had died when the plane crashed near Riverside Municipal Airport. After further investigation, Moore announced late Monday in a news conference that the death toll was now three.

A Cessna 310 crashed about a half-mile northeast of the Riverside Municipal Airport, according to Ian Gregor, a Federal Aviation Administration spokesman. It had departed from Riverside en route to San Jose.

The plane had five people on board, and split apart when it hit two Riverside homes, Moore said.

There were no victims on the ground or inside the homes, the fire chief said. But he added that they would do a secondary check Tuesday morning.

Of the five people on the plane, three had died and two were injured, the fire chief said.

One of the passengers was taken to the Riverside Community Hospital and another to the Arrowhead Regional Medical Center in Colton, Moore said. Both are women, he said, correcting previous information that one of the survivors had been a teenager.

Earlier in the evening, Moore had said that they believed one of the victims had been a resident. In a later press conference, he said it appeared that the people on the plane "were injected into the house" when the plane hit.

Moore said the pilot did not appear to be among the survivors.

The National Transportation Safety Board will continue their investigation in the morning, Moore said.The people on the plane had been in Southern California for a cheerleading competition at Disneyland, and were heading back to San Jose, he said.

"It's horrible, coupled together that they were going to a cheer competition," Moore said. "This is supposedly a happy time and then just to have a tragic incident like this, and into one of these Riverside residences, it's really a sad case for us."The block was evacuated, sending residents from about 20 homes to a shelter.

The aircraft had a full tank of fuel, causing the fire to continue burning. Investigators also want to assess the neighborhood in case of dropped plane parts, as debris scattered in the impact.

Traci Zamora who lives in the neighborhood, heard the crash.

"I was inside the house and it shook our whole house like an earthquake," she told CNN over Facebook. "It is all so surreal."

She said her family had seen an older man and a younger family who lived in the the two affected houses.

Another resident, Chloe Hirohata told CNN in an email, "I heard an explosion, witnessed a large plume of smoke coming from the scene and rushed over."Riverside is about 54 miles southeast of Los Angeles.