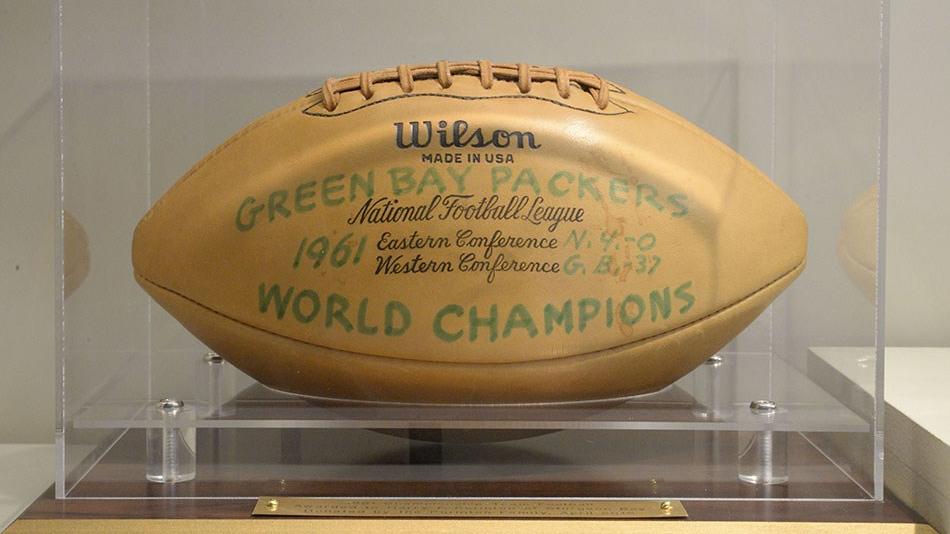 The Green Bay Packers Hall of Fame Inc. on Friday received the donation of a unique autographed football from the 1961 season, the Packers’ first NFL Championship season under Vince Lombardi.

The ball bears more than 40 autographs from the Packers’ 1961 roster, and will be displayed in the Packers Hall of Fame near the replica of Vince Lombardi’s office.

The autographed football was donated by the Purinton family, which includes adult siblings Helen, Jim, Martha and Dick, whose father received the ball as part of recognition he earned at the 1962 Barbershopper Convention in Green Bay. For years, the Purinton siblings’ father, Harry, originally from Sturgeon Bay, told his family that Bart Starr himself passed the ball to him at the convention, but the siblings often dispute the family legend amongst themselves.

While Starr may not have passed the ball directly to Harry, Starr certainly was present at the event and the football bears his signature, along with ten other Pro Football Hall of Famers’ signatures from that era. The Purinton siblings all were present at Friday’s donation, taking their first trip to the new Packers Hall of Fame.

Those interested in donating Packers memorabilia or artifacts to the Packers Hall of Fame Inc. may contact Gwen Borga at [email protected] or 920/965-6984.