WAUWATOSA, Wis. (CBS 58) -- An 18-year-old pilot is in critical condition after he crash-landed a single engine plane in a Wauwatosa backyard Thursday afternoon, on May 26.

The crash happened just before 3 p.m. in a neighborhood across the street from Timmerman Airport.

Before the crash the pilot radioed the tower to say he had engine failure, that the engine was stalling.

Crash investigators combed through the secure scene for hours in a residential backyard as they literally piece together what happened.

Neighbors are shaken by what they saw and heard.

Amanda Schomberg was pushing her 2-year-old daughter on swing set when she noticed the plane flying lower than usual. "This one, for whatever reason, I looked up and saw it in the corner of my eye. It just kept coming down. I'm still in shock that it happened."

She then watched the plane crash into next door neighbor Rashad Hicks' backyard. Hicks said, "It was so loud it shook my house."

And many others heard it, too, like Jennifer Jenkins. "I heard a big pop. Like engine pop and metal."

We are on the scene of a plane crash in the area of N 103 St/W Courtland Av. Please avoid the area as emergency crews secure and investigate the scene.

We spoke with the homeowner of this house - the plane crashed in his backyard. He said it was a loud thud that shook the house. He said he went outside immediately to check on the pilot, who was alive. The homeowner coached him to keep breathing until ambulance arrived pic.twitter.com/8SCAJ4zHX8

Neighbors say a single-engine prop plane was circling Timmerman Airport for much of the day, practicing takeoffs and landings.

At 2:45 the unidentified pilot radioed the tower for help, saying, "Ground, reporting engine failure, it's not working. It's stalling, I don't know what to do." The tower responded, "Are you solo?" The pilot said, "I'm sorry, I didn't have my flaps up." That was his last communication.

Neighbors say the plane seemingly fell out of the sky shortly after. From across the street, Alexann Davis said, "And there was no smoke, no fire."

Jennifer Jenkins said, "You never think it would happen. You always see them low, but they always go low here."

Police confirm the pilot is 18 and may have been in distress before the crash. Wauwatosa Police Chief James MacGillis said, "There is indication of that, but we're still investigating. We do have liaison officers in the tower over at Timmerman Field."

Back at the crash scene, Rashad Hicks ran out of his house and into his backyard to see what happened. His wife called 911.

The pilot was still in the plane, but severely injured.

Hicks said he "Just kept coaching him to keep breathing. Officers arrived on the scene, too many I couldn't believe, because there's a plane in the backyard!"

Witnesses say there was no fire and no smoke, but they worried about a gasoline explosion.

Emergency crews arrived within minutes, trying to rescue the pilot.

Neighbor Robert Dietlmeier saw "The fire department was taking away the left wing, and then they took the door off and they got access to the pilot."

Alexann Davis said, "I saw them pull someone out alive."

The pilot was taken to a hospital with what was described as a critical injury.

As crowds gathered, the scene was taped off and the crash site was secured.

Somehow, no one else was injured.

Amanda Schomberg said she's still shaken by what she saw, and her daughter is aware of what happened. "My daughter keeps repeating 'crash' and 'boom.'"

The Federal Aviation Administration (FAA) and National Transportation Safety Board (NTSB) were contacted and will help with the investigation. 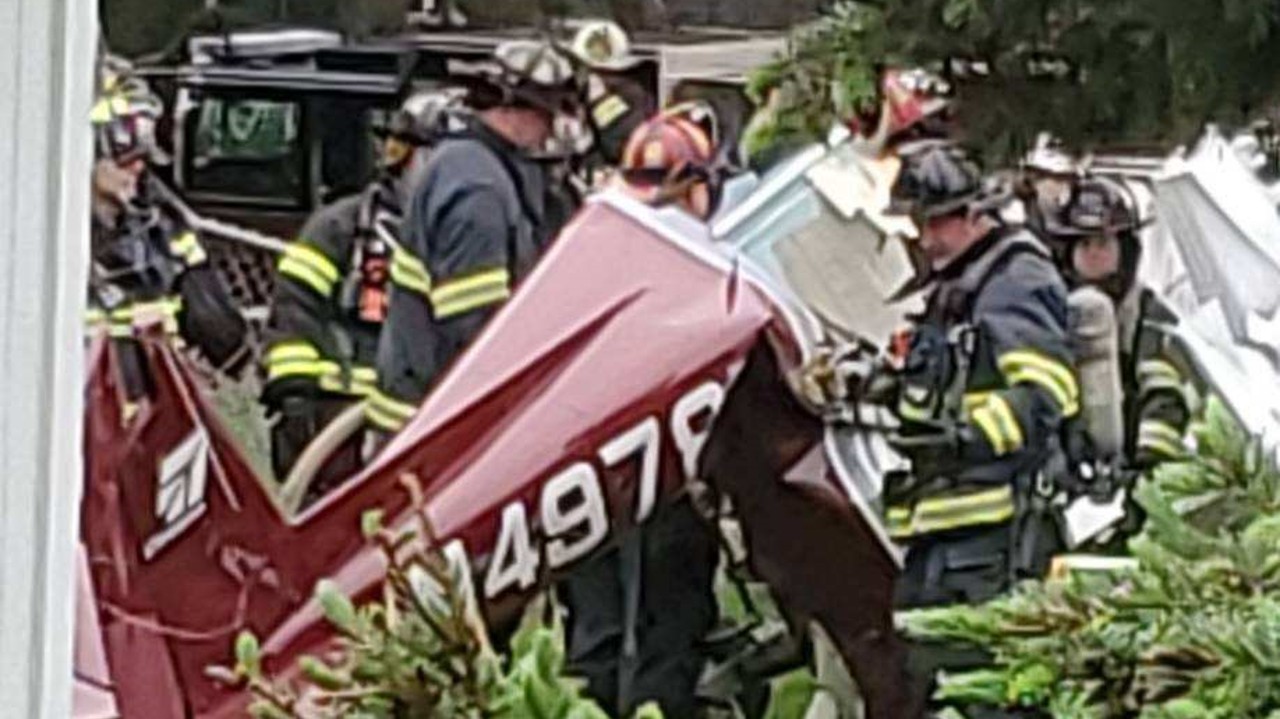