16 Arrested after crowds get rowdy following Arizona's loss to Wisconsin 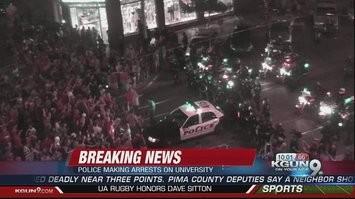 Wisconsin beat Arizona 64-63 on Saturday night and earned a spot in the Final Four of the NCAA men's basketball tournament.

Arizona was the No. 1 seed in the West Region and Wisconsin the No. 2 seed.

About 20 minutes after the game ended, several hundred people blocked a road on the University of Arizona campus, said Sgt. Pete Dugan.

Police reported some damage to property.

Those arrested were charged with resisting arrest, unlawful assembly and disorderly conduct.

The Arizona-Wisconsin game was the second of two games Saturday in the NCAA tournament.

In the first game Saturday, Florida defeated Dayton 62-52 in the South Region to earn a Final Four berth.

The Final Four games will be played Saturday, April 5.

On Sunday, Michigan State will face Connecticut in the East Region and Michigan will battle Kentucky in the Midwest Region.