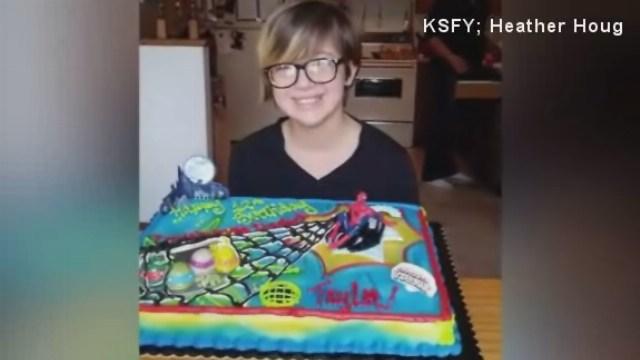 A young girl in Sioux Falls, South Dakota did something different for her birthday this year.

Instead of asking for presents for herself, she asked for items to help animals in local shelters.

Taylor Spomer just turned 12-years-old. And like anyone, was incredibly excited about her birthday presents -- all 250 pounds of them.

But these gifts were not for her to keep.

\"I just said hey instead of presents could I have donations for the humane society?\" Taylor said.

\"That's the only thing she wanted, everybody was really surprised they said, no presents? She doesn't want anything? And I said, nope, no presents this year, just food.\" Houg said.

And Taylor's friends and family obliged. All together, they donated more than 200 pounds of cat, dog and bird food to the Sioux Falls area animal shelter.

Taylor's mom says the humane society couldn't believe it when they dropped off all that food.

\"Six or seven large dog food and cat food bags, we had a 30 pack of canned food,\" Houg said. \"They were overjoyed, they were like oh you have donations-- and we said we have a lot of donations. We had to get a cart and it was over flowing, I had to carry some of the stuff in.\"

\"It just makes me feel happy and that people will actually do that for me and for the animals. Kind of like warm and fuzzy inside,\" Taylor said.

She can't even have any pets because she's allergic, but that didn't stop her from helping dogs and cats in need.

\"I really like animals and I read awhile ago that they're not taking in anymore cats because they don't have enough room and I felt really bad so I thought if maybe I can give a little food to them, it might help them out.\"