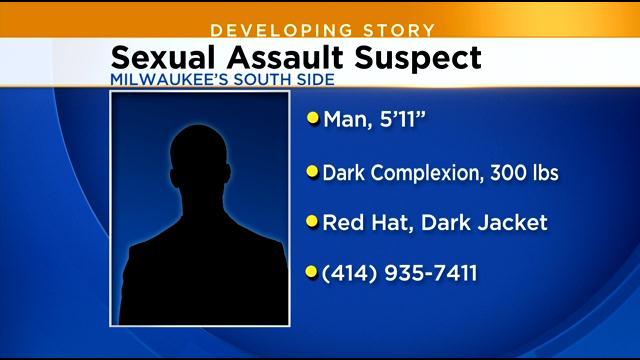 Milwaukee Police are looking for a young man who sexually assaulted a 10-year-old girl Tuesday morning.  It happened near S. 15th Place and W. Orchard about 8:45 am on December 16th.

Neighbors tell CBS 58 that the girl was on her way to St. Martini Lutheran School, the assault happened about a block away.

Rodriguez says she called 9-1-1 while her daughter ran outside to try to stop what was happening. \"She was running towards him, that's when he took off running,\" she said.

Andrea Gallegos says she heard the screaming Tuesday morning, and saw how shaken the little girl was in the aftermath \"that little girl, she was so scared, it was just so sad,\" she said.

Rodriguez says that the suspect has been seen many times in the neighborhood. Now they hope police track him down. \"Put him away. No girl should have to go though what the little girl went through,\" Rodriguez said.

Here is the full description of the suspect from Milwaukee Police:

The Milwaukee Police Department is investigating the sexual assault of a 10-year-old girl on the city's south side. Police say a suspect approached the 10-year-old around 8:45 a.m. near the intersection of S. 15th Pl. and W. Orchard St. That's where the girl had been sexually assaulted.

The suspect is described as a Black or Hispanic male in his late teens with a dark complexion. Police say the suspect is 5'11\" and 300 pounds. He was last seen wearing a bright red baseball cap, dark hooded jacket and dark pants. The suspect was last see running north toward Greenfield Ave.

Anyone with information about the sexual assault suspect should call Milwaukee Public Sensitive Crimes at 414-935-7405.