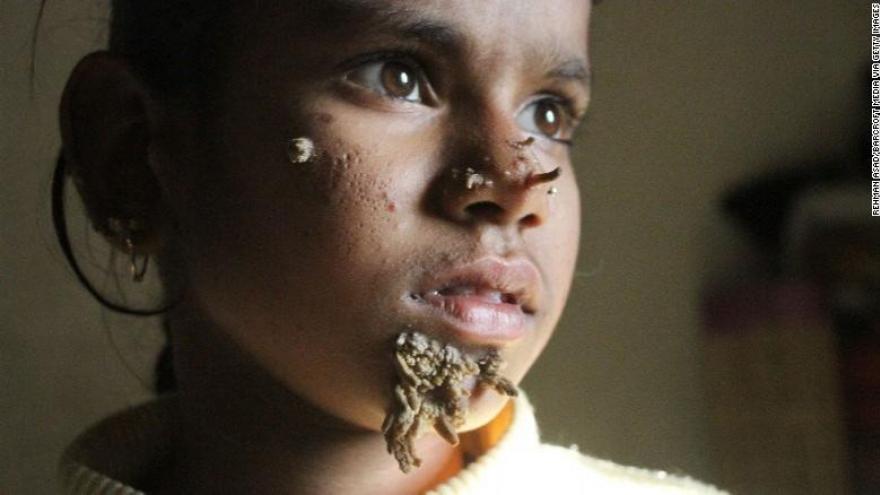 (CNN)A 10-year-old girl in Bangladesh is being treated for the extremely rare condition known as "tree man" syndrome.

Sahana Khatun was admitted to Dhaka Medical College and Hospital on Sunday with unusual marks and growths on her face.

"She has bark-like warts growing on her chin, nose and ear," Dr. Samanta Lal Sen, chief plastic surgeon at the hospital, told CNN.

Sahana first developed the disease eight years ago, when her father found some rashes on her face. Only since last year have the tree-like warts begun sprouting on her face.

The symptoms are thought to be that of epidermodysplasia verruciformis, a rare, heritable disease; there have only been a handful cases reported around the world. Those with the condition are likely to develop malignant skin tumors.

"We don't know yet if this is (one) hundred percent a 'tree man' syndrome, but it definitely is a variety of the epidermodysplasia verruciformis, disease which causes very unusual skin disorder," Lal Sen said.

The condition is caused by a defect in the immune system which increases one's susceptibility to cutaneous HPV, or human papillomavirus.

Sahana lost her mother when she was 6 and lives with her father, a laborer.

"Due to a weak financial condition of the family, (the) hospital is bearing all of their medical and personal costs" Lal Sen said.

Doctors at the hospital are planning to operate and remove Sahana's lesions as early as next week.

Lal Sen said her condition is not very serious and since she has a milder form of the disease, the team is confident that they can clear Sahana's face within one surgery.

Abul Bajandar, the well-known "tree man" of Bangladesh is going through treatment at the same hospital.

After many groundbreaking surgeries, doctors were able to remove the tree-like branches that were growing out from his fingers, palms and feet.

Bajandar, 27, lived with his growths for years before beginning surgery to remove the them last February. Since then he has had 19 procedures to restore his hands, and will undergo a few before he is released from the hospital.

Before the surgery, Bajandar could not eat, drink, brush his teeth or take a shower by himself. The only thing he could do was scratch his neck.

Lal Sen told CNN that Bajandar is now in "very good shape," and can eat and write using his own hands. The final procedures, he said, are more for "beautification."

"I want to live like a normal person. I just want to be able to hold my daughter properly and hug her," Bajandar told CNN last year.