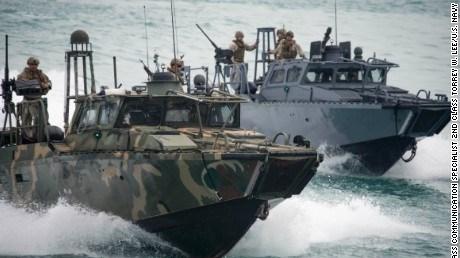 (CNN)The 10 American sailors captured by Iran have been freed.

They were captured Tuesday after their two naval boats entered Iranian waters near Farsi Island, in the Persian Gulf.

What sounded like the sailors' imminent release Wednesday morning dragged on for hours, with Iranian officials interrogating the sailors about their motives and demanding a U.S. apology.

But Iranian officials said they deemed the incident accidental.

"The evidence suggests that they unintentionally entered the Iranian waters because of the failure of their navigational system," IRGC spokesman Ramazan Sharif said on Press TV.

The sailors then boarded the USS Anzio, where they were undergoing medical checks.On Wednesday morning, officials interrogated the sailors to see whether they "entered Iranian waters intentionally on an intelligence mission," the Iranian Revolutionary Guard Corps said, according to the state-run Press TV.

And Iran's foreign minister called for the United States to apologize for the "encroachment" of American vessels into Iranian territorial waters, a top Iranian navy commander told state-run media.

IRGC Navy Commander Admiral Ali Fadavi said the presence of the U.S. Navy in the Persian Gulf waters "disturbed the security of the area" and criticized the U.S. Navy maneuvers.

There is nothing to indicate the capture was a hostile act on the part of Iran, a senior Obama administration official said.The vessels were en route from Kuwait to Bahrain and were sailing near Farsi Island in the Persian Gulf.

A senior defense official said no distress call was made by the ships.

Another senior defense official told CNN the boats were in the area of Farsi Island for refueling, but it's not clear whether they actually refueled -- raising the possibility they ran out of power.

Iranian Foreign Minister Mohammad Javad Zarif spoke with Kerry on the phone and said a boat had a mechanical problem and accidentally strayed, according to a senior administration official. Zarif assured Kerry the sailors were being treated well and would be released.The capture of the sailors came days before the deal agreed to between Iran and world powers to freeze Tehran's nuclear program is expected to go into force.

The Iranian Revolutionary Guard Corps, which is largely responsible for Iran's nuclear research, is expected to benefit financially from the lifting of sanctions under the pact, in return for a halting of Tehran's nuclear program.

But the lifting of sanctions is due to begin with the pending implementation, and this incident could throw a wrench in the works.

The capture of the Navy sailors was quickly seized on by U.S. opponents of the nuclear deal as the latest in a series of provocations by Tehran since the deal was agreed. Other incidents include ballistic missile tests that the United Nations charged violated a Security Council resolution.

"This kind of openly hostile action is not surprising," Arkansas Republican Sen. Tom Cotton told CNN's Wolf Blitzer. "It's exactly what I and so many others predicted when President Obama was negotiating the nuclear deal with Iran -- that it would embolden their aggression towards the United States and our allies in the region."

But Earnest pushed back on the criticism of the deal."Certainly the United States has been concerned of the kind of provocative destabilizing actions that have been a hallmark of Iranian behavior over the last several decades," Earnest said. "In fact, that is why ... the United States and this president made it a priority to organize the international community to reach an agreement with Iran that will prevent them from obtaining a nuclear weapon."In 2004, three British patrol boats were boarded and seized by Iranian security forces in the Shatt al Arab waterway, which divides Iraq and Iran. The crew of the three boats, including eight British sailors and marines, were blindfolded and paraded on Iranian state TV and held captive for three days.

In 2007, Iran captured 15 British sailors and marines in the Persian Gulf and accused them of trespassing in Iranian territorial waters. Britain maintained that its service members never entered Iranian waters.

Those British service members were paraded before then President Mahmoud Ahmadinejad, and critics said their apologies were extracted under duress. They were released after two weeks.

After the 2007 capture, then-Chief of Naval Operations Adm. Mike Mullen said "we've got procedures in place which are very much designed to carry out the mission and protect the sailors who are there, and I would not expect any sailors to be able to be seized by the Iranian navy or the Iranian Republican Guard."