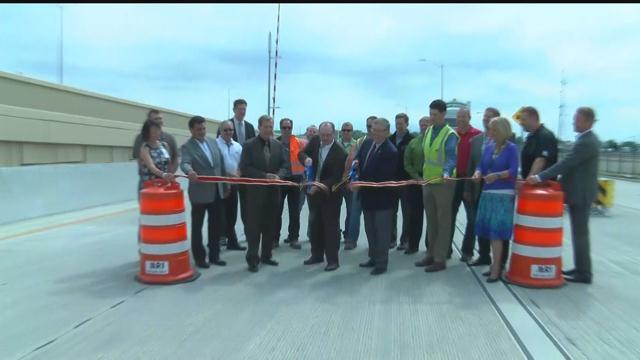 Thursday marked a milestone for the Zoo Interchange construction project.

The State of Wisconsin DOT held a ribbon cutting to celebrate the opening of the 84th Street ramp. The ramps opening signified the halfway point for the project.

"We are at fifty percent complete, and it's sort of all downhill from here," said Brett Wallace, State of Wisconsin DOT South Region Director.

The part of the project that is completed is called Core 1. That work is being completed slightly ahead of schedule. Next, the DOT will work on Core 2, which includes the West and South leg of the interchange.

The DOT took the time to thank drivers for their patience today. They know they are working on busy roads, and many are affected.

Just over a month from now, a million people are expected to take th newly opened 84th Street exit and others.

"There will be no shutdowns. There will be no ways of which they have to go around where they've had to the last few years," said Kathleen O'Leary, Interim Wisconsin State Fair Park CEO.

O'Leary says all 8 entrances will be open for the fair.

"This was definitely challenging for all parties involved, but the DOT did an amazing job. The cream puffs will be ready to go for the 400,000 people that want to eat them, and everything that everyone's been so excited about will be ready to go," said O'Leary.

The north leg of the project will have to drafted be in next state budget, so that portion is estimated to finish in 2020.