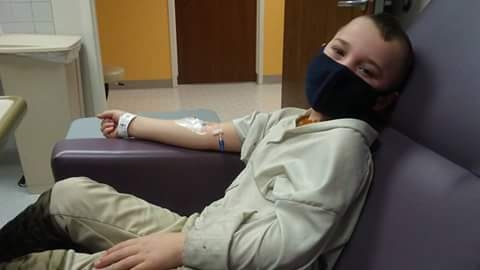 WEST ALLIS, Wis. (CBS 58) -- The Millers of West Allis are speaking exclusively to CBS 58 News about how construction dust made their boy so sick the emergency room became their second home.

This is not a family that is feeling sorry for itself.

Instead, they want to get the word out about how they got to the bottom of their son's illness and got the help they needed to make life a little easier.

Jim and Tiffani Miller selected their home because it brought them back closer to family.

It was a double lot with plenty of room for their three kids to play outside.

"And it was inexpensive," recalls Jim. "I thought fantastic."

But almost immediately the youngest of their three children, Gabriel, starting getting so sick he would collapse.

"I thought I was going to die," the little boy told CBS 58's Michele McCormack while surrounded by his sister Faith and older brother Liam.  "I didn't know what to do."

His parents felt just as helpless.

"His lips would turn blue," says mother Tiffani. "His oxygen levels would drop. It was a moment when I realized I was helpless. We could only pray that they would figure it out."

After months at Children's Hospital, the diagnosis finally came in; extreme asthma.

That's when Tiffani's mom sought help from nurses, doctors and the health department.

She is with Partners for Asthma Action through the American Lung Association.

With the medical reference, she was able to help the family overhaul their home and eliminate potential triggers.

Things improved, but not enough.

"Now we have to look outside the box," Brundidge told CBS 58's Michele McCormack. "What else is he exposed to on a regular basis? And you look outside the window and see the construction is right outside."

Unlike dust from inside which is generated by dust mites, construction dust is ground bits of concrete and other materials in an environment that is so large, it's hard to control.

"You don't need to be sitting in a dust cloud or a sand storm," Brundidge insists. "Dust is so tiny you can breathe it miles, blocks away."

Brundidge lobbied the Department of Transportation to make some changes including spraying down the dust more than usual.

Some of the workers even befriended Gabriel who would momentarily venture outside as long as he was wearing a mask.

"Things are different for him this year," says Tiffani. "He didn't spend the entire summer in the hospital."

But Gabriel still can't go outside very long and never steps outside him home without a mask.

The family hopes that when the construction is complete Gabriel will be able to breathe much easier.

They haven't ruled out moving, but say it isn't that easy.

Partners for Asthma Action hopes that people will recognize just how commonplace asthma is in the Milwaukee area and will take action to live a better quality of life.