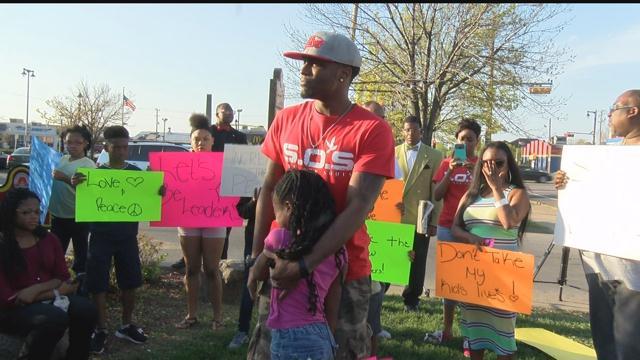 CBS 58- After a violent week in Milwaukee, a group rallied for peace Friday night.

People gathered at 27th Street and Capitol Drive, the very block where two people have been shot in just the last week.

One little girl, joined her dad to plead for peace after her 9-year-old cousin was shot.

“I really miss her very much,” said 10-year-old Nyasha Hurst. ”And whoever did it, they shouldn't have did it in the first place cause a not a good idea to shoot a kid in the head.”

The group is calling for people to come together and find ways to end a culture of violence in Milwaukee.

“We have to start changing the violent nature of the people in the community,” said Quinlin Bishop, Nyasha’s dad. “Find out why they're angry, where's the anger coming from? Why is that turning in to violence?”

Community activist Tracey Dent says that means people who see something have to step up and work with police.

“When it comes to violence and hurting someone, there's no such thing as a snitch,” Dent said. “It's called justice.”

Dent is concerned summer will bring even more violence and encourages people to get to know their neighbors.

“It's insane. The violence is insane,” Dent said. “And we need to stop it now or reduce it now because we don't want another 2015.”

And as the group prayed for solutions Friday, Nyasha says she's also praying her cousin recovers.

“I hope that she feels better and she can be able to come out and walk out and talk to me.”