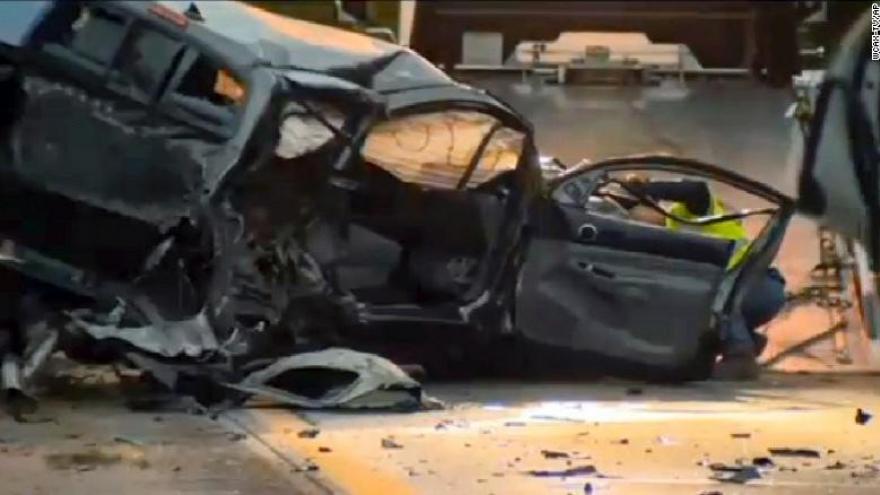 (CNN) -- Members of several close-knit neighboring communities in Chittenden County, Vermont, are mourning five teenagers who died in a fiery car crash over the weekend after a vehicle traveling in the wrong direction struck them, authorities said.

Vermont Gov. Peter Shumlin ordered flags lowered to half-staff through Thursday for Eli Brookens, 16, of Waterbury, Mary Harris and Cyrus Zschau, both 16, of Moretown, Lim Hale and Janie Cozzi, both 15, from Fayston.

"The loss of five young Vermonters in such a senseless tragedy is heartbreaking," Shumlin said. "Vermont is a community, and today we share the sadness and loss of the families and friends of these teens."

The driver of the other vehicle has been identified as Steven Bourgoin, 36, of Williston, Chittenden County State's Attorney T.J. Donovan said. He has a criminal history in two other states that includes domestic violence and driving under the influence, Donovan said.

Bourgoin is in critical condition at the University of Vermont Medical Center, hospital spokesman Gary Douglas said. He will be arraigned later this week.

Bourgoin was driving on the wrong side of Interstate 85 near Williston and struck the teenager's Volkswagen Jetta late Saturday night, authorities said. The car erupted in flames, littering the highway with debris as bystanders tried to assist.

While an officer was trying to pull one of the victims from the burning vehicle, Bourgoin stole the officer's vehicle and fled the scene, Williston Police Captain Michael Henry said.

As he attempted to escape he crashed into eight vehicles and was ejected from the police car, Henry said. The collision sent five people to the hospital with non-life threatening injuries, said Douglas, the hospital spokesman.

The aftermath of the collisions shocked firefighters, leaving "the most horrific scene they have seen in their 10 to 15 years," Williston Senior Firefighter Prescott Nadeau said.

"We go through hundreds of hours of training, but no amount of training can prepare you for what those firefighters saw," Nadeau said.

A community in mourning

The teens, who had known each other since elementary school, were returning from a concert in South Burlington, Harwood Union High School athletic director Sue Duprat said.

Four of the teens attended Hardwood Union in Duxbury, where the community gathered to mourn on Sunday.

"We are a fairly small community," Duprat said. "Our kids are very prominent in our own little world."

Both schools and the towns they serve are grappling with a "tremendous loss to our community," Harwood Union High School co-principal Lisa Atwood said.

"They're just trying to put one foot in front of the other and process it," Atwood said. "Our communities will come together to support them, as well as our students, and figure it out together."