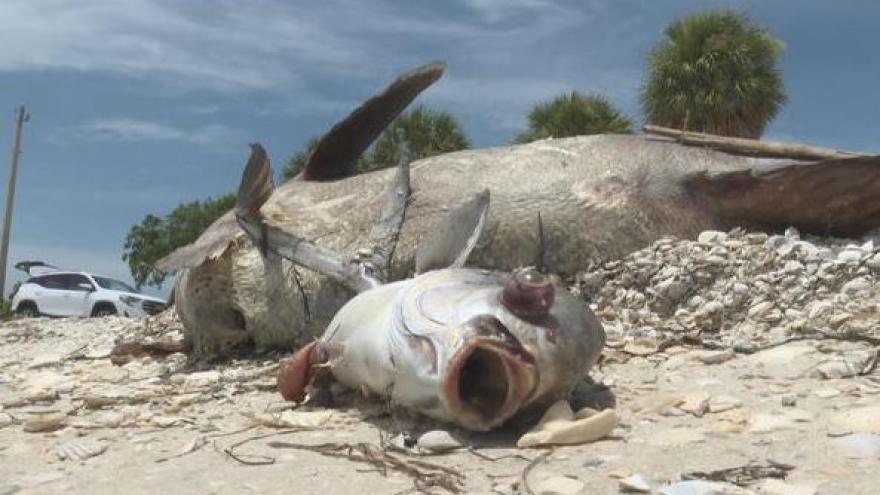 MIAMI (CBSNews) — Thousands of fish, eels and turtles are dying, sometimes as far as the eye can see, in parts of southwest Florida. Just this week, one of several lifeless manatees was pulled from the water. The suspected culprit is a toxic algae bloom known as "red tide."

Ozzie Fisher has been a fishing guide in the area for more than 20 years and is already seeing cancellations.

"It really stinks," he said. "Imagine if you paid $5,000 to come here on vacation and you tell your wife and your 3-year-old to go on the beach and breathe this in, you can't do that. It's bad."

The toxins can also be harmful to humans, causing respiratory illnesses for some beachgoers.

The algae and bacteria are usually found in pockets, but this year they've mushroomed to stretch over 150 miles. Warmer waters and runoff from lakes and streams can fuel the problem.

The red tide, which typically goes away in the spring, has persisted for nine months. Conservationists like Heather Barron say the overall effect on fragile species like sea turtles, which have turned up sick or dead, can be long-lasting.

"I've cried three times already today," Barron said. "Imagining one day my three small children may grow up and these animals may not be here anymore."

On Sanibel Island, cleanup crews haven't been able to keep up with this putrid wave of dead sea life, and it extends for miles in either direction. There's no telling how long this could last — the worst bloom lasted 17 months in 2006.