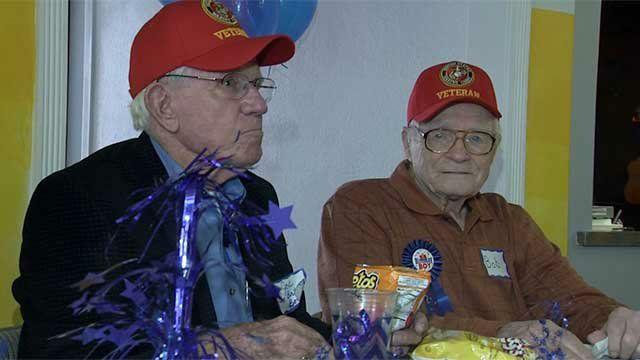 Joe Rodgers and his best friend and old comrade, Bob West, celebrated their birthdays Saturday at the Fremont Street Experience. With a little music, line dancing and a lot of cake, Rodgers said he got a birthday celebration he'll remember for the rest of his life.

\"I feel good that I got here, and I thank the Lord that I did because it's been a lot of fun,\" Rodgers said.

Rodgers said turning 90 is blessing, but it wouldn't have been the same if West wasn't there to celebrate with him.

\"We had a good time together,\" West said recalling their time as soldiers. \"Joe was always a ladies man.\"

Rodgers and West, 91, met when they were a couple of teenagers. They were young Marines in the Fighting Fourth Division in World War II.

They fought side-by-side through three years and four battles. The last battle was Iwo Jima. The two said at the base of Mt. Suribachi, they witnessed what would become one of the most iconic images of American history: raising the flag on Iwo Jima.

\"When the war ended, we double-dated,\" Rodgers said. \"We met my wife and some other ladies in Los Angeles.\"

Rodgers married his wife on Valentine's Day in 1946 in Birmingham. A few weeks later, Bob took a bus down from Michigan to congratulate them.

\"When he left there, that's the last time I saw him before the day before yesterday,\" Rodgers said. \"That was 69 years ago.\"

Rodgers moved to Los Angeles, while West started a family near Detroit. They lost touch until five years ago, when Rodgers and his daughters found West through Google. They've kept in touch for the past five years, but as a birthday present, Rodgers and West's children coordinated a reunion for the two best friends.

West said this would be his first time flying on a commercial airplane, but to celebrate and share old war stories again, he wouldn't have missed this opportunity for the world.

\"There were tears,\" said Maryhelen Smith, Rodgers' daughter. \"It was just like 69 years hadn't even happened.\"

West and his family will fly back to Michigan on Monday.