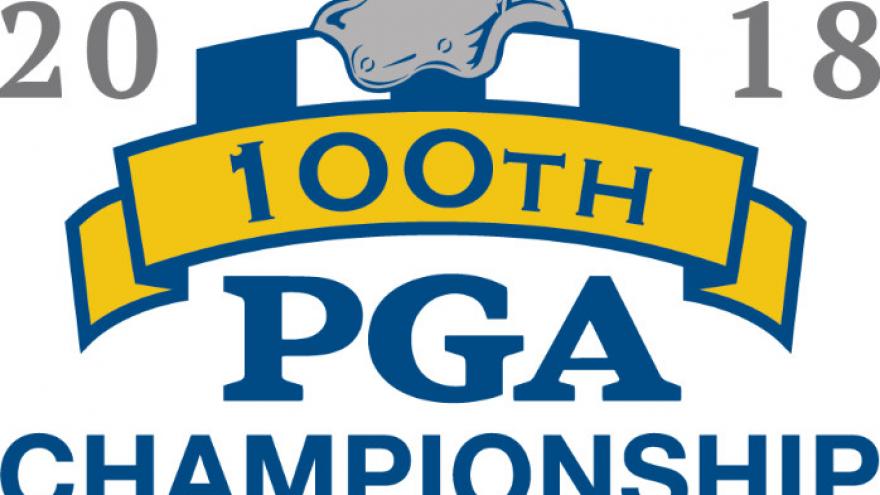 ST. LOUIS (AP) — Sirens blared across Bellerive, putting the second round of the PGA Championship on hold and ending a day of scoring rarely seen in a major.

Gary Woodland set the 36-hole record — for now, anyway — after a round where his driver wasn’t as reliable, he didn’t see many putts drop and he didn’t hit the ball quite as well as the day before.

That put him at 10-under 130, breaking by one the PGA Championship record and tying the 36-hole score for all majors.

And it was only good for a one-shot lead over Kevin Kisner.

Still to be determined was whether Woodland’s score even holds up as the lead. Storms arrived forcing a two-hour suspension, and the PGA of America declared the rest of the day a wash when rain pounded the course. Rickie Fowler had just birdied the 10th hole and was at 7 under.

Tiger Woods had three birdies through seven holes as he tried to get in range.

“I felt I was headed in the right direction,” said Woods, who was at 3 under. “Tomorrow is going to be a long day for a lot of us.”

The second round was to resume at 7 a.m. local time. The greens would be slightly smoother, the course slightly longer, the approach unchanged — see flag, aim at flag.

Perhaps it was easy for Woodland not to be overly impressed. He was playing with Kisner, who shot 29 on the back nine and was in the middle of the ninth fairway — his final hole — needing a birdie to become the first player to shoot 62 in the PGA Championship. He came up short of the green, chipped too strong and made bogey for a 64, leaving him one shot out of the lead Friday.

Right in front of them was U.S. Open champion Brooks Koepka, who had a 20-foot birdie putt he wanted to make for no other reason than he likes to make birdies. This one missed, and only later did Koepka realize it was for 62. Instead, he was the 15th player to shoot 63 in the PGA Championship.

“My caddie said something walking off,” Koepka said. “I didn’t even think of it. I’ve been so in the zone, you don’t know where you are.”

And then Charl Schwartzel made it 16 players with his eight-birdie round of 63.

No one from the afternoon draw completed more than 12 holes. The plan was to finish the second round, make the cut and then immediately start the third round in threesomes off both tees.

“I feel like we’re in a good spot,” Fowler said. “But the nice thing about the delay and going back out tomorrow morning, we’ll get fresh greens.”

Bellerive really had no defense.

Woodland and Kisner played in the same group, and they offered a great example that Bellerive is accommodating to just about any game. Woodland is among the most powerful players in golf. Kisner is not. He relies more on a clean hit with his irons and a great short game.

The course is so soft — not so much from Tuesday’s rain, but the extreme heat that requires more water on the turf — that every flag is accessible provided players find the ample fairways.

“Greens are receptive, so my 4-iron stops as quick as his 7-iron,” Kisner said. “If they were firm, I don’t think I would have a chance with the way the greens are situated and the places they’re putting the flags. But being receptive, that’s my only hope.”

Woodland’s 36-hole score broke the PGA record by one shot, most recently set by Jimmy Walker and Robert Streb at Baltusrol. It also tied the 36-hole record for all majors, matching Jordan Spieth at the 2015 Masters, Martin Kaymer at the 2014 U.S. Open at Pinehurst No. 2 and Brandt Snedeker (Royal Lytham & St. Annes in 2012) and Nick Faldo (Muirfield in 1992) at the British Open.

Spieth still has hope in his second try at a career Grand Slam. Spieth didn’t get under par for the tournament until his seventh hole Friday — the par-3 16th hole — and he managed to do enough right for a 66 to get within seven shots of the lead.

Spieth has battled with his game all year, and his confidence isn’t at its peak. It’s the nature of the course that makes him feel he has a farther climb than the seven shots that separate him from Woodland.

“A little frustrated at this place in general,” Spieth said. “This course would be phenomenal — and probably is phenomenal — if it’s not playing soft. You get away with more. You don’t have to be as precise. ... Personally, I would prefer more difficult and firmer, faster conditions on the greens. Having said that, I would have shot a much higher score yesterday.”

Defending champion Justin Thomas was at 2 under through seven holes, while Rory McIlroy was frustrated with all pars in his seven holes. On a day like this, that meant losing ground.

“It’s been 16 pars in a row from yesterday to today, so hopefully I can break that run in the morning,” McIlroy said.

Midway through the afternoon round, the cut was projected to be even par. Woodland, even with the lowest 36-hole score in 60 years of stroke play at the PGA Championship, still had a long way to go. In conditions like Bellerive, no lead was safe.

“I feel safe because I feel safe where my game is,” Woodland said. “I’m not too worried with what anyone else is doing out there.”