Women are Fastest Growing Group of Gun Owners in America 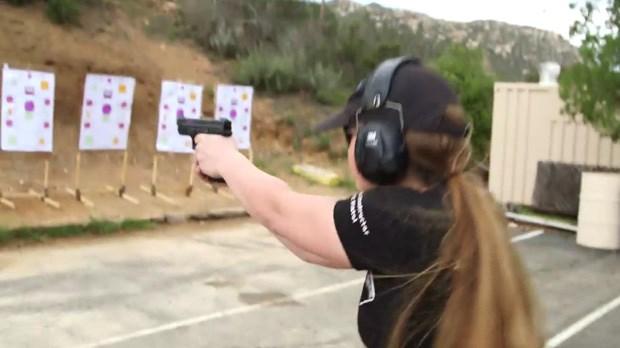 (CBSNews) You might call it girl power. According to the National Shooting Sports Foundation, women are the fastest-growing group of gun owners in the U.S.

Typically their weapon of choice is a semi-automatic handgun -- lightweight, accurate, and so simple that practically anyone can learn to use it.

In states that allow it, a handgun has for some become the must-have accessory.

"I've got two kids," said Colleen Krehbiel. "And I just wanted to have something that would keep me safer." She wears her weapon in a holster on her hip.

"I just feel safer having it with me," said Laura Bowman, who carries her weapon in the front pocket of her purse.

Turns out most prefer basic black. And since more women than ever are taking up arms, there are gun stores that cater to women, like She's A Pistol in Shawnee, Kansas.

Becky Bieker and her husband opened the store in 2012, selling thinner, lighter guns, and purses with handgun compartments. She showed Smith one purse with a dedicated pocket on the back, with two zippers, "so you can access the gun from either side."

And of course there's the gun garter, for "date night," Bieker said. "More popular in summer, of course."

Beyond all the lace and leather, Bieker is also selling readiness.

"There are people out there who will say, 'If a woman gets a gun, it's more likely it'll be used against her than she'll use it in self-defense,'" said Smith."That's a difficult one," replied Bieker. "But I'll tell you, if somebody wants to come in here and buy a firearm, and I think it's going to be more of a threat to them until they're trained, we won't do it.

"The truth is that everything I sell here is either for recreation -- in which case please use it all you like, use it more than you like -- or it's for self-defense. And I hope that no one ever has to use it for self-defense."

She knows what that feels like: In January 2015, four armed robbers opened fire at the original She's A Pistol location, killing Becky's husband. She says she survived only because she shot back.

"I made that choice years ago that if I was pushed to that point, I was comfortable pulling the trigger," she said.

"Of course not. You never think you'll have to use it. The fact of the matter, is we cannot depend on a third party, be it our husband, our father, a police officer, anyone else to protect us. We have to take that responsibility on ourselves."

So for women like Letita Ivory, target practice has become the new knitting circle, where women train for a day they pray will never come.

Smith asked, "How's it's different than taking a yoga class together?"