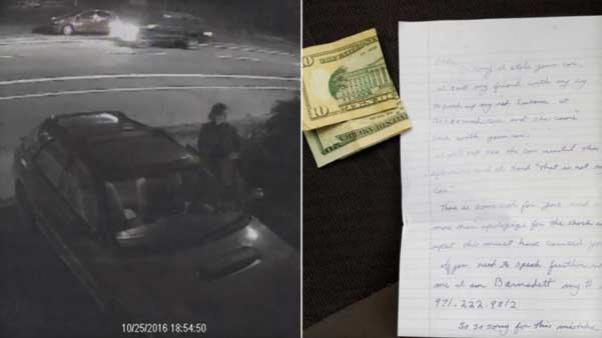 (CBS NEWS) Erin Hatzi’s husband assumed his wife wasn’t home on Tuesday when he didn’t see her car on the driveway or in the garage.

But when he stepped inside, there she was. Surprised, he asked where she had parked.

“In the driveway,” she responded, confused by his question.

The Portland, Oregon, couple frantically checked security footage from a camera located outside of their garage. Sure enough, around 7 p.m., they saw a woman get into the car, back out of the driveway and zoom off.

So, they immediately called the police.

“We were pretty angry and astounded that the car was taken directly from our driveway,” Hatzi told CBS News.

But less than 24 hours later, the car reappeared.

And it turns out, the whole thing appears to have been a giant mixup.

They pieced together the story after police stopped a woman who drove up to the house in the missing Subaru Impreza. Hatzi’s husband happened to pop his head out the front door as police were making their stop.

“He told them that the car belonged to his wife and that it was stolen from the driveway they were standing in front of,” she said.

As he examined the car, he spotted a note and some cash tucked underneath the windshield wipers.

In it, the woman gave her name and phone number, and explained:

“Hello, So sorry I stole your car. I sent my friend with my key to pick up my red subaru at 7802 SE Woodstock and she came back with your car. I did not see the car until this morning and I said, ‘that is not my car.’ There is some cash for gas and I more than apologize for the shock and upset this must have caused you. ... So so sorry for this mistake.”

At first Hatzi thought this couldn’t possibly be true — it seemed so far-fetched. But as the police investigated, they confirmed that the woman’s story checked out.

An officer explained that in some older model Subarus the keys can be interchangeable, which is likely how someone mistakenly drove off with the wrong vehicle.

“I was very relieved and then it was mostly amusement and disbelief that something like this could happen,” Hatzi said.

Subaru of America has not yet returned CBS News’ request for comment on this matter.