WOODSTOCK, Ill. (CBS 58) -- "I remember everything up to getting hit, and then I remember waking up in the hospital," says Brittney Prehn.

It's been nearly two months since the 22-year-old was hit by lightning at the Country Thunder music festival in Twin Lakes, Wisconsin. She is still healing, but the Illinois woman is back on her feet and has doctors amazed.

CBS 58 spoke with Prehn at Nikos Red Mill in Woodstock, Illinois where there will be a fundraiser in her honor on Saturday, September 15th. With therapy four days a week, the medical bills are piling up. 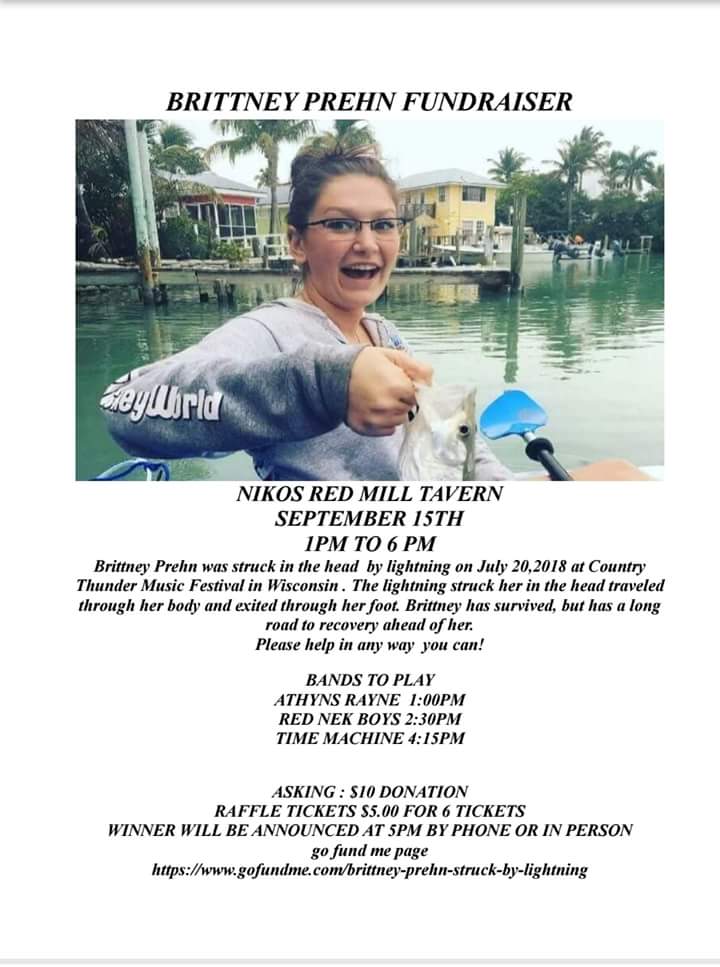 For those that can't make it, Brittney does have a GoFundMe page.

She is walking and talking -- telling us her doctors are amazed she's able to tell her story. Prehn was talking on the phone to meet up with friends, while camping at the Country Thunder musical festival on July 20th when lightning struck her.

"I was talking to him and then that's the last thing I remember," said Prehn.

Brittney now knows what happened when lightning struck her. She says it hit the phone and her ear and entered her head. The lightning threw her phone yards away and separated the lightning bold. She says the lightning then traveled through the right side of her body, down her legs and out through her foot. She has scars on her body along the lightning's path.

The lightning detached her ear, exposed her brain, and left her with brain bleeds in the hospital. She's still working through many injuries. The right half of her face is paralyzed, the lightning twisted her hips so she has trouble walking, hip pain and balance issues from brain trauma. She is deaf in her right ear and partially deaf in her left. She also feels electric shocks regularly, and has body pains and migraines, - just to name a few things, she's dealt with since waking up in the hospital.

Brittney explains some of the injuries and pain she's dealing with.

Brittney doesn't remember getting struck and didn't know why she was in the hospital when she woke up.


Despite what she calls the worst pain imaginable, she is thankful.

"I don't wish this on anyone, not even myself, but I'm glad it happened to me rather than someone who doesn't have a support system at home. There was little kids there, and pregnant mothers, and people that probably didn't have the willpower to fight like I do," said Prehn.

She says she wants to meet and thank the paramedics who saved her life at Country Thunder. Prehn says she did speak to the young woman that first found her.