Woman slashes her children's throats to quiet them, police say 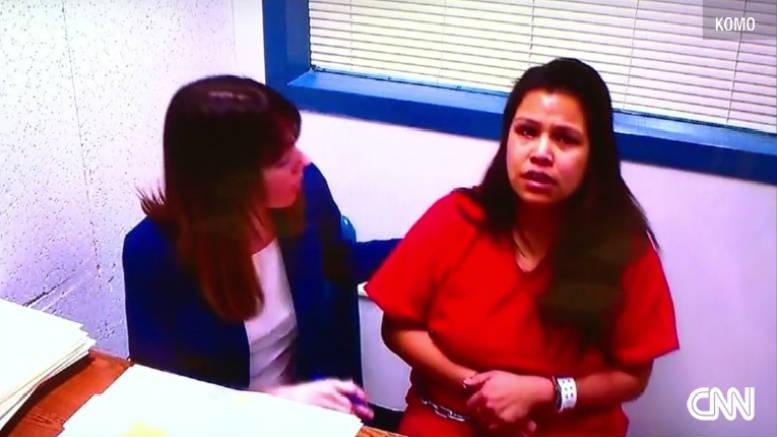 (CNN) -- A young mother in Washington state has been charged with attempted murder after authorities say she cut her children's throats in an attempt to keep them quiet.

Over the weekend, Christina Booth called 911 to report that her three children were crying nonstop and \"needed medical attention,\" according to a recent probable cause filing.

When officers arrived at the Olympia, Washington, home Saturday night, they found a troubling scene. As spelled out by a local prosecutor, police saw the twins on the couch crying \"uncontrollably\" and \"bleeding from their necks.\"

One officer then went upstairs and found the couple's 2-year-old in bed, under the covers with \"dry blood all over her.\"

All three were taken to a local hospital, where, CNN affiliate KOMO reports, they underwent surgery. They are now in stable condition and will be placed in protective custody.

In their probable cause filing, authorities paint a picture of a mother overwhelmed and suffering from postpartum depression.

A judge set bail for Booth at $3 million, KCPQ, another CNN affiliate, reported.

Wine and a movie

The night that ended in tears and blood began with wine and a movie.

In the probable cause filing, Thomas Booth told investigators he had two \"large glasses\" and his wife had at least the same amount.

\"Thomas said he was feeling intoxicated,\" the document reads \"and Christina was intoxicated to the point that she was slurring her words.\"

As the movie wrapped up, Thomas Booth told police, his wife took the toddler upstairs to put her to bed, but then \"a short time later Christina came down the stairs in only her underwear crying and screaming.\"

Christina Booth, like her husband, spoke to authorities without an attorney present. Her story differs from her husband's slightly, a local prosecutor said.

She told a police detective that she was having \"a really rough time\" taking care of her three children. She said that her husband \"never helps\" and that he \"gets very annoyed when the children cry and make noise.\"

Like her husband, Christina Booth said they were watching a movie and she went to put the toddler to bed just before the movie ended. She then told authorities that the twins started crying and \"she hit her breaking point.\"

In the probable cause document, a prosecutor says she confessed to the crimes of which she stands accused, saying \"she knew if she killed all the kids the house would be quiet for Thomas.\"

\"During the interview, Christina broke down crying several times, yelled about Thomas never helping with the kids\" the document says. \"Christina made the comment 'they will be quiet now' several times.\"

Thomas Booth told police that his wife has been \"very stressed out raising the children\" and that she took medication for postpartum depression. He also said she \"always takes the children out of his presence if they cry.\"

The couple's account differs in where the attack on the twins took place.

Christina Booth told authorities she carried them downstairs after attacking her toddler and cut their necks while they lay on the couch. Her husband told police he found the babies upstairs with injuries to their necks and brought them downstairs to render first aid.

'Why weren't we knocking on the door?'

Thomas Booth has not been charged, and KOMO reports that police do not suspect he played any kind of role in the violence.

Tiffany Felch, who has spent time with the pair, told KOMO, \"I would have never suspected that she would be a person to take this kind of a drastic action. I can't imagine what stress she must have been under to cause her to do such a thing.\"

KOMO reported that neighbors say Christina Booth was normally social, but changed after giving birth to the twins.

Neighbor Tammy Ramsey expressed concern to KOMO about the potential for missed opportunities to help the family.

\"Why weren't we knocking on the door?\" she said. \"I think that we need to rally and love to understand and not to judge.\"