Woman gets Valentine's Day flowers from husband after his death 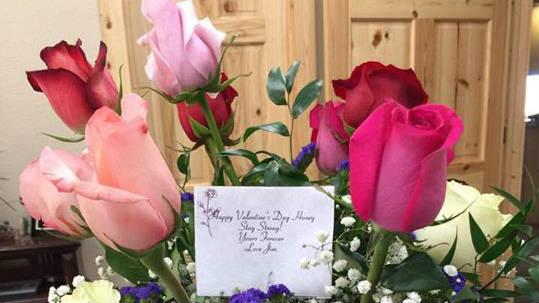 After being diagnosed with an inoperable brain tumor in 2014, one man immediately arranged for his wife to always remember him on Valentine's Day.

Last February, Shelly Golay's husband Jim was diagnosed with an inoperable brain tumor. \"He had a Glioblastoma and it was an uphill climb. The diagnosis wasn't good,\" said Golay. That's when Jim called a florist and made sure his wife would get her favorite flowers every Valentine's Day.

The flowers were delivered two days before Valentine's Day, and Shelly says she was speechless when she saw they were from Jim. \"She called the other day,\" said Florist Jessie Row. \"We all started almost balling. So it was really touching to hear the story and know that he had done that for her. It seems like something that only happens in the movies or that you hear about.\"

Widow Shelly Golay says, \"He's such an amazing man and he can love beyond boundaries. There is no boundaries with him, even in death, he's just amazing.\"