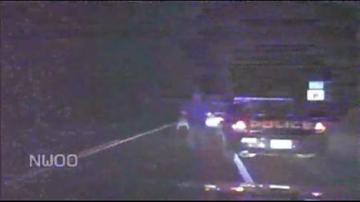 TWIN LAKES-Some early morning heroics Wednesday more around 3 a.m. when a woman delivered a baby in the front seat of her car.

The husband called 9-1-1 and two police officers arrived just in time to help as the baby came out with the umbilical chord wrapped around his neck.

\"The baby's coming out,\" the father declared to the Kenosha 9-11 dispatcher who told him to find something to place under wife's butt and encourage her not to try to push.

It was too late.

\"I didn't plan on this happening in the car,\" the father said laughing slightly.

Then the panic sets in voice.

By that time two police officers who had been dispatched arrived and took over the delivery.

Officers Jeffrey Comp and Katie Hall were there to gently glide the chord away from the child's neck.

They spoke to CBS 58's Sachelle Saunders about their heroics which they say is all in a day's work.