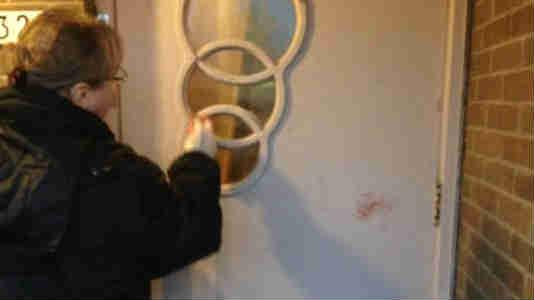 One man is dead and a woman recovering from gunshot wounds after a shooting in West Allis Wednesday night.  A witness tells CBS 58's Matt Doyle she was at home when a woman started pounding on her door near 57th & National.  She looked out the door and saw a woman with blood all over her face and hands.  The woman said the victim was looking for help. Claudia Derringer said she called 911 and tried to keep the victim calm.

\"All of a sudden I heard banging on the door, kicking on the door,\" Derringer said.  \"So I approached the door and there was a lady outside very frantically saying, let me in, I was just shot, they shot  my boyfriend. She was going back and forth here, I quick called the police.\"

Derringer said the victim was frantic and scared.

\"She said it happened behind in the alley and then the police were here in a matter of like seconds and they took care of her.  That was the end of it and now I'm just cleaning her remains off my door.\"

West Allis Police have no one in custody and say the investigation is ongoing.
Share this article: