Woman battling cancer gets married hours before her death 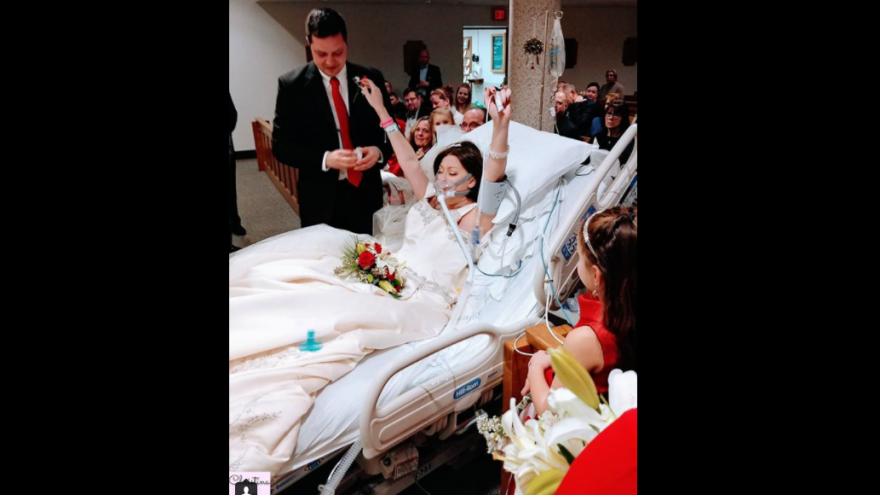 Heather Mosher was dressed in her wedding gown and lying in bed wearing an oxygen mask as she and David Mosher said “I do” Dec. 22 at St. Francis Hospital and Medical Center in Hartford. A photo shows her raising both her arms in the air in an apparent display of triumph.

The 31-year-old school psychologist died the next day – just 18 hours after the nuptials.

The East Windsor couple fell in love after meeting at a swing dancing class in 2015. David Mosher told news organizations that on the day he planned to propose to her on Dec. 23, 2016, she was diagnosed with cancer. But he decided to go through with the proposal that night as they rode a horse-drawn carriage.

“I said to myself, ‘She needs to know she’s not going to go down this road alone,'” he told WFSB-TV.

Despite surgeries and chemotherapy, the aggressive form of cancer spread and she had to be put on a ventilator. They set a wedding date of Dec. 30, 2017, but doctors urged them to do it sooner and they moved up the date.

On the day of the wedding, family and friends worked together to get Heather Mosher into her gown and a wig. The couple exchanged vows in the hospital’s chapel.

David Mosher said some of his wife’s final words were her vows.

“It was just like surreal because I’m supposed to be exchanging vows to her and here I am saying goodbye,” he told ABC News.

Her funeral was held Saturday, the original date of the wedding.