Woman accused of using Facebook while driving is charged with homicide 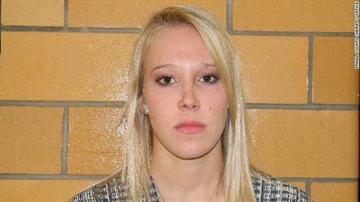 (CNN) -- A North Dakota woman who police say was using Facebook on her cellphone when she crashed into another car is accused of negligent homicide in the death of a great-grandmother during the May accident.

Sletten is accused of driving 85 mph on a North Dakota highway May 27 while using her cellphone when her car rear-ended an SUV.

Jennifer Meyers was driving the SUV with her daughter and 89-year-old grandmother, according to an affidavit. A witness told police he saw Meyers' brake lights and turn signal when Sletten's Ford Escape plowed into the car on Interstate 29.

Sletten did not brake and nearly hit the witness' vehicle after striking Meyers' SUV, according to the affidavit.

Meyers' grandmother, Phyllis Gordon, a Minnesota resident, was a passenger in the front seat and died on the scene, the affidavit said.

Meyers and her daughter Paige, who also live in Minnesota, were treated at a hospital for non-life-threatening injuries, the court documents said.

Investigators later obtained a warrant to search Sletten's phone and determined she was looking at photos on her mobile Facebook app at the time of the crash, according to the affidavit. She had also sent text messages while driving. The lack of skid marks on the road suggested Sletten did not see Meyers' car in front of her, the documents said.

Police obtained a warrant and arrested Sletten on August 27.

Although many car accidents happen because of distracted driving, it's difficult to determine whether cellphone usage is the cause unless officials are able to search the suspect's phone, as they did in Sletten's case, Niewind said.

\"We do get behind vehicles and all of a sudden they're weaving on the road,\" Traill County Sheriff Mike Crocker told CNN affiliate KVLY/KXJB. \"We do initiate a traffic stop and try to find out what's going on. Texting and driving to me ... is becoming a very serious problem.\"

The North Dakota texting and driving law, enacted in 2011, prohibits drivers from reading, writing and sending electronic messages, including email, KVLY/KXJB reported. The law carries a $100 fine, but Crocker said a tougher law was needed.

\"We gotta have a reason for them to not text and drive,\" the sheriff told KVLY/KXJB.

According to a 2011 survey by the National Highway Traffic Safety Administration, drivers between 18 and 20 have the \"highest incidence of crash or near-crash experience,\" and report the highest level of phone involvement at the time of a crash or near crash. At least half the drivers said talking on a phone made no difference in how they drive.

Two out of 10 drivers said they drove more slowly when talking on the phone, according to the NHTSA survey.

Sletten, a resident of Hatton, is to appear in court October 8. Her lawyer, Bruce Quick, declined to comment.

Traill County State Prosecuting Attorney Stuart Larson was out of town and unavailable for comment.

According to Paulette Bowersox, clerk of Traill County District Court, bail was set at $5,000.