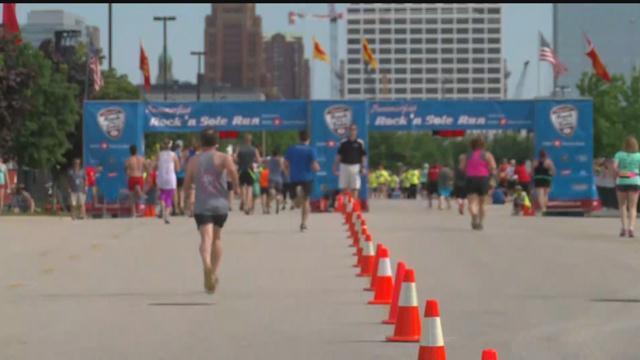 With a hot forecast in store, race officials did what they could to prepare runners for the heat.

"We really communicated with the runners in the last probably 48 hours -- just reminding them about the weather forecast. To hydrate well before they come out, and hydrate on the course," said Gayelin Littell, with the Rock 'N Sole race.

As the weather became more hot and humid around two and a half hours into the race, red flags went up on the course. That signaled to the runners the race was no longer being timed. The flag system operates according to conditions.

"The race is not over. Runners are allowed to continue; they just will not get any results at the end of the race," said Littell.

Littell says this was done as the conditions were too hot for a normal race. She says stopping the timer encourages runners to simply finish the race, and not worry about when.

"This is not about setting a personal record today; it's about being safe. Slow down, walk if you get tired," said Littell.

Stations along the course had ice chips and wet towels -- something race officials added last minute after hearing the forecast.

According to race officials, no one was seriously injured during the race.