NOW: Wisconsin loophole allows violent sex offenders from across the state to move in next door

FOND DU LAC, Wis. (CBS 58) – How would you feel if a violent sex offender from a different part of the state moved in down the street from you and your children? An offender from Racine County is now living in Fond du Lac County under supervised release, even though there’s a law to prevent this from happening.

The sex offender next door

A 48-year-old from Racine was convicted in 1991 of 2nd-degree sexual assault of a child. The state deemed the man as a sexually violent person. After serving his time in prison and undergoing treatment, he’s now living in Fond du Lac County under supervised release with a GPS monitoring bracelet on.

The man is living on Nitschke Road, down the street from Scott Degner, a grandfather. Degner is worried about the many kids who live on the block.

“You have other parents obviously concerned about the fact that the sex offender is on the end of the street,” Degner said.

“They're not able to ride their bikes down towards the direction of the offender's house, or any directions on our roads, because I just can't trust our area,” Rickert said.

Fighting to keep offenders in their own county

Sexually violent persons can be put on supervised release after they’ve served prison time and received treatment. However, over the years numerous offenders have been placed outside of their home counties.

“I just think each county should be taking care of their own,” Degner said.

Fond du Lac District Attorney Eric Toney said they have had four or five attempts to place sexually violent persons from other parts of the state in Fond du Lac County since 2013. They’ve successfully kept all but the one man out.

“We understand if there's someone that has been convicted of a crime here in Fond du Lac County and they go through that civil commitment process they're going to come back to Fond du Lac County,” Toney said. “We would have to take our own back and we just ask that other counties do the same thing.”

These Southeastern Wisconsin residences have all been leased by the state to sex offenders on supervised release. 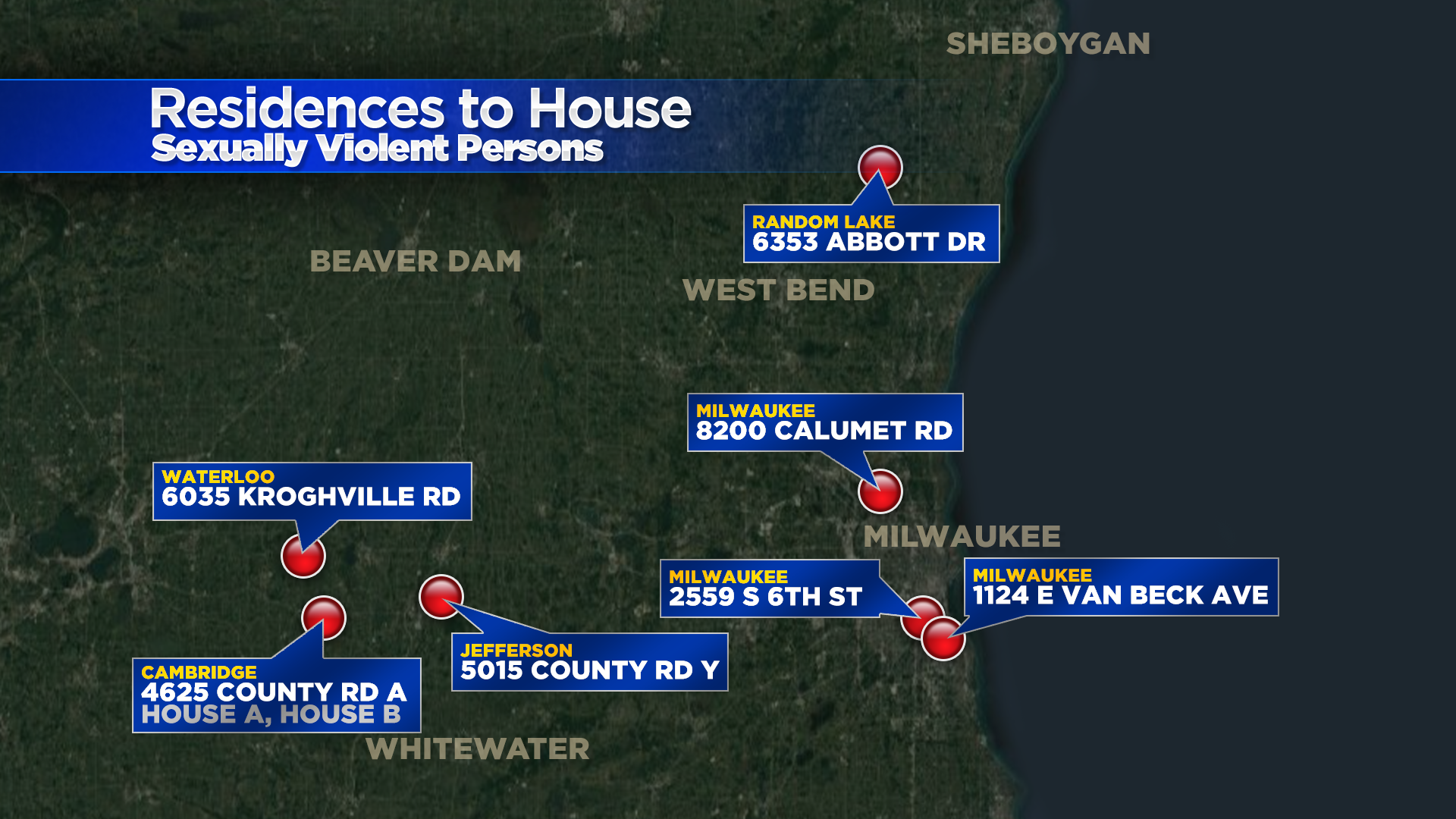 In Fond du Lac County, District Attorney Eric Toney said there’s a landlord who rents his property to the state.

“So that property being available is what has made El Dorado a ground zero and a magnet for these out of county placements,” Toney said.

The law trying to prevent it from happening

In March, Wisconsin Act 184 was signed into law, requiring sexually violent persons to be placed only in their county of residence.

“When you're dealing with these folks that are the worst of the worst, we're going to do everything we can to help keep our community safe and ensure that these folks are going back to the counties where they are from,” Toney said.

But, Toney said the law is not being followed. Act 184 doesn’t apply to offenders that have already been placed, but it does apply to pending petitions, which means someone who has already started the process of being placed but hasn’t been put in a residence yet. The problem is, judges can’t agree on the definition of pending petitions.

“The day before ACT 184 came into effect, if the judge ordered supervised release, a judge, theoretically based on their interpretation could place somebody in Fond du Lac County,” Toney said.

Prior to the law change, there were about 30 offenders in the middle of the release process. Toney said that’s causing a loophole, which allowed the man, mentioned earlier, to be placed in Fond du Lac County this summer.

“There's still some work that I'll be asking legislators and the governor to do to eliminate the need to interpret what pending petition means and firm the law up,” Toney said.

Wisconsin Lawmakers said they plan to address this issue in January. Senator Patrick Testin said in a statement:

It is disappointing that a judge is disregarding the will of the legislature and is choosing to place this SVP out of his county of origin. This is why we drafted and passed the law in the first place. We are willing to work with stakeholders to strengthen this law if needed and reinforce our intent to judges.

Fond du Lac County Residents would like to see the law changed too.

“I would like to see him go back to Racine,” Degner said. “Take him out and take him to Racine.”

Because some families are scared and worried this could happy to people across Wisconsin.

“I know that addictions are hard to fully wipe away triggers can bring things back to re-offend,” Rickert said. “I don't want my kids to be the victims of their re-offending.”