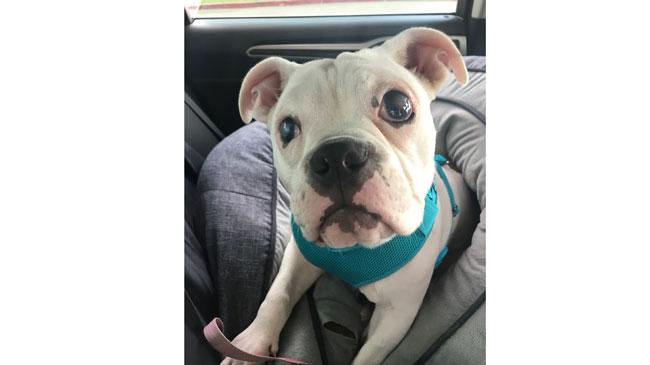 A blind bulldog puppy has found his forever home, thanks to an incredible journey by a Milwaukee couple.

It all started early this year, when Cassidy Kraus and Brett Weyers began searching for a dog to add to their family. They already own a 4-year-old named Soto, blind since he was a puppy.

That's when they found a 4-month-old bulldog, also blind, and in need of a home. The catch? He was at a shelter in Sacramento, California.

"All of a sudden she comes to me and she goes 'Brett! I found him! I found the perfect puppy!", says Weyers. "I was ecstatic, like when can we set up an appointment to meet him? And she paused for a bit and goes well...he's actually halfway across the country."

The couple submitted the first application, and received a call from the shelter, telling them he was theirs, if they were willing to make the journey.

"I was like, this is too good to be true," says Kraus. "We have the experience with his condition. We know what to expect for him, how to train him, it was a great fit."

The journey there was far from easy. 13 hours into the trip, Weyers was hospitalized with food poisoning.

"Brett and I were like, 'is this kind of a bad omen?" says Kraus. "Everyone told us we were crazy, but we were set on doing this."

They continued on, all the while hoping two blind dogs could see eye to eye.

"Ago came with a lot of puppy qualities. Jumping, and mouthing, and biting," says Kraus. "But they figured it out."

The couple says the drive home was much easier.

"The whole time we would just look at him and keep smiling the entire way back," says Weyers.

Ago is settling in to his new life in Milwaukee, bumping his way around the apartment to map the space.

"They'll come turn the corner too fast and somebody will go smack dab into a door, or right into a piece of furniture that's not where it's supposed to be. And you hear it each time and you can't help but cringe. But they get up and keep going like it never happened."

Two brothers that share a lot in common, even if they can't see it.

The couple is hoping their story leads others to adopt special needs animals.

"They have maybe more love in their heart for you, a huge personality," says Weyers. "We don't know what it is, but they're amazing, they're special."