Wisconsin Badgers back at practice preparing for "Final Four" 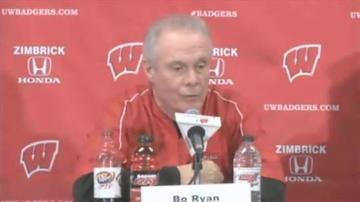 Just one day earlier, thousands of fans greeted them with thunderous applause and their advancement out of the Elite Eight to the NCAA Final Four.

This has been a really long season,\" said Coach Bo Ryan after practice. \"This is quite the journey. We've had more practices and this team and I have been together more than any other team I've coached.\"

CBS 58 News and Sports is going on the road with the team. Look for live reports beginning Wednesday at 10 p.m.

Anchor Michele McCormack joins Earl Arms and John Cuoco who have been with the team every step of the way.

The Badgers play on Saturday against Kentucky. Tip off is scheduled for 7:49 p.m. in Texas. The game will be broadcast on TBS.

Coach Ryan said that emotions were so high when his team beat number one seed Arizona that he forgot the moment when he helped cut down the net.

CBS 58's David Ade has more from the Kohl Center in Madison.