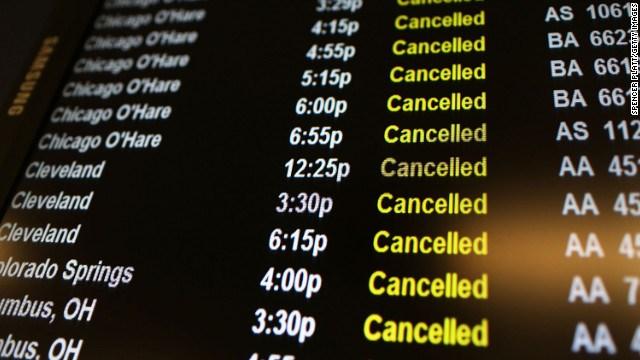 (CNN) Airports in the Midwest are canceling flights ahead of a major winter storm set to hit the country's midsection Sunday and Monday.

Nearly 2,000 U.S. flights have been canceled so far, according to Flightaware.com, an online flight tracking service.

Many of those flights are into or out of Chicago.

A blizzard warning is in effect for the Chicago metro area. The National Weather Service says snow accumulations could reach 18 inches in some areas and winds could gust up to 35 mph during the day Sunday.

\"This potent Midwest snowstorm has the potential to drop over a foot of snow in the Chicago region today and into Monday morning,\" said CNN meteorologist Derek Van Dam. \"The storm will pivot over the Windy City, causing several hours of heavy snow.\"

Up to a foot of snow is also forecast in parts of Iowa, Illinois, Michigan and Wisconsin. Multiple winter storm warnings are already in place from eastern Nebraska and South Dakota, through the Plains states and up the Northeastern Seaboard into New Hampshire and Maine.

\"Chicago isn't the only area of concern going forward,\" Van Dam added. \"This storm has its eyes set on the Northeast, where last week's blizzard has already crippled many New England cities.\"

Sleet and freezing rain will be falling along with the snow and significant wind should be expected, according to the National Weather Service.

The same weather system will dump cold, rainy weather south of the Mason-Dixon line, from the Tennessee Valley into the Carolinas and Virginia.