Winter is Halfway Over 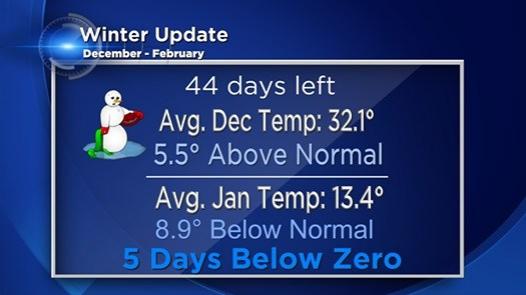 Meteorological Winter officially runs December through February. So on today's date, we've crossed the halfway point and have just forty-four days to go until Spring.  Weather conditions so far have varied greatly from December to January.  December was dry and mild and January has been cold and also wetter.

Here are some of the highlights:

Milwaukee dropped below zero five times all during the month of January and another night that fell right to that zero mark. By huge contrast, December had no sub-zero nights. Additionally, December almost closed out the month recording double-digit temps on both the highs and the lows.  Almost. The first time we never made it out of the teens happened on the 30th, and the low on that date was seven. New Year's Eve was also chilly with a high of 18° and a chilly low of just two degrees. Let's gloss over the month of January. It's been cold, with ten of fourteen days below normal. The reminder of how cold it's been makes me a little depressed!

Moving on to precipitation. Well, we got more rain during December than snow.  That sounds weird to say, doesn't it? We received just a half inch of snow on the second of the month. January has come with more wet weather as half of the days so far this month have recorded measurable snowfall.  Here's a look at winter snowfall so far:

So what's in store the next forty-four days of the winter season?  The Climate Prediction Center of the National Weather Service just posted the February outlook and the three month outlooks for temps and precipitation.

There's nothing exciting to see here for southeast Wisconsin with near normal conditions on the temperature front.

The February through April timeframe shows equal chances for above or below precipitation for most of the country apart from the four corners states and the desert southwest. There you can see an area of green painted in showing a better chance for above normal precip.

While we have no strong signals for extreme weather the rest of the winter, we know there will still be cold days a hopefully a little more snow to play in before it's over!