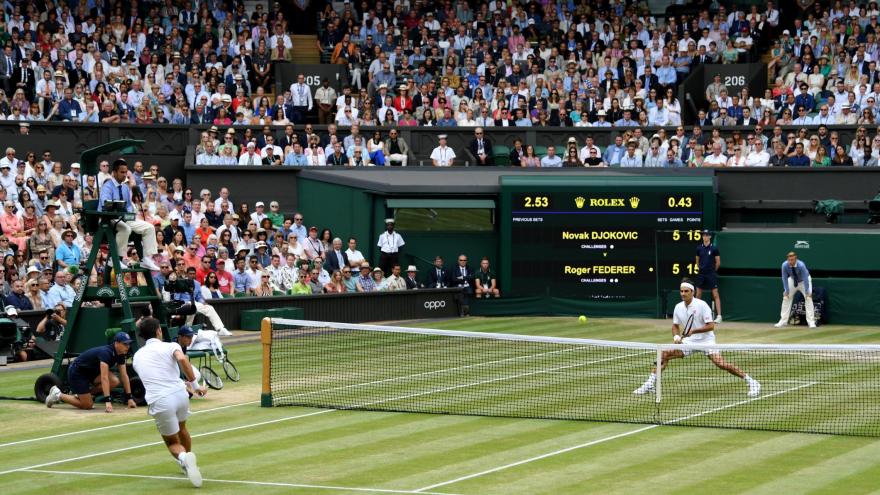 (CNN) -- This year's Wimbledon tennis championships have been canceled by organizers because of the ongoing coronavirus outbreak.

The grass-court grand slam was due to begin on June 29 but a decision was made to scrap the event for the first time since World War II.

The number of confirmed cases has continued to rise in the UK with its government implementing lockdown measures on the entire country.

Tournament organizer the All England Club (AELTC) held an emergency meeting Wednesday to discuss possible options before making its announcement.

"This is a decision that we have not taken lightly, and we have done so with the highest regard for public health and the well being of all those who come together to make Wimbledon happen," said AELTC chairman Ian Hewitt.

"It has weighed heavily on our minds that the staging of The Championships has only been interrupted previously by World Wars but, following thorough and extensive consideration of all scenarios, we believe that it is a measure of this global crisis that it is ultimately the right decision to cancel this year's Championships.

"And instead concentrate on how we can use the breadth of Wimbledon's resources to help those in our local communities and beyond. Our thoughts are with all those who have been and continue to be affected by these unprecedented times."

READ: Can the Tour de France go ahead without the 'soul of the sport?'

In Wednesday's statement, organizers said efforts would now turn towards helping in the emergency response and supporting those fighting the spread of the virus.

"We have begun distributing medical equipment and offered the use of our facilities to the NHS and to the London Resilience Partnership, the collection of agencies in London fighting the battle against Covid-19," read the statement.

"We are working with the local authorities in Merton and Wandsworth, particularly on food distribution, and we are distributing food supplies through our partnership with City Harvest."

The French Open, due to start on May 18, has already been pushed back until September, while all professional tennis has been suspended until further notice.

Sport has been severely impacted by the global pandemic. The Olympics -- set to be held in Tokyo this summer -- has also been postponed.