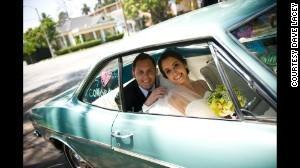 (CNN) -- Dave Lacey stood motionless in his living room, his eyes tracing the glass from his shattered porch door to the empty shelf that once held his XBox. In the home invasion, the burglars focused on the high priced items in his house -- electronics and jewelry. But Dave barely paused as he cataloged them for the police. The one item he stressed in his police report was his wife's Canon camera.

\"It just didn't seem fair,\" he recalls, \"because after all that we went through, to lose those, it was like a punch in the gut.\"

By \"those\" he means the pictures on the camera's memory card that he had not yet backed up on a computer. The card held the last pictures of him and his wife, Erica Werdel. They were the pictures from her funeral.

\"Even though those are hard pictures to see, they're still something I want captured and want to remember,\" says Dave.

When Dave met Erica, it wasn't like being struck by lightning or seeing fireworks. That sort of schmaltz didn't have a place in their time together, a pragmatic theme that would weave through their relationship. They knew each other casually at first, through work. Dave couldn't help but notice the dark-eyed brunette who could make anyone laugh. He also noticed the petite woman was, unexpectedly, a great basketball player. And he couldn't help but pause when she spoke, her eyes kind and generous.

As is the case with most relationships, the timing is everything. It would take an entire year before they started dating.

Eventually, the couple got engaged. Erica's family is sizable so their wedding, they agreed, had to have at least 200 people. Planning an event of that size while also working on their dual careers was chaotic and exhausting.

In the weeks leading up to their wedding, Erica brushed off what she thought was a mild illness. But the cold didn't seem to go away. At first, her doctor thought she might have lupus, an autoimmune disorder. The doctor suggested she get a full body CT scan.

The scan showed a softball-sized tumor in her chest, pushing on her heart. A second tumor was behind her diaphragm. The diagnosis came just days before their wedding: large B-cell non-Hodgkin's lymphoma. Erica was 28 years old, stricken with a rare form of lymphoma affecting young women.

The cancer was so aggressive that Erica went through her first round of chemotherapy a few days after the initial diagnosis. The doctors urged the couple to cancel the wedding because of the risk of infection from exposure to the guests. Dave shakes his head and smiles as he remembers Erica's reaction. \"She wasn't going to let cancer get in the way of that,\" he says. \"She really put everyone else in front of herself. She never sat back and said 'woe is me.' She never gave up.\"

At first glance, you miss the skin-colored bandage around the bride's arm in the wedding photos. Underneath the bandage is a temporary portacath for Erica's chemotherapy. The bandage irritated the bride, but the doctors insisted she would have to wear it to attend her wedding. Erica grudgingly obliged, ordering the wedding photographer to crop it out or obscure it whenever possible. She didn't want to look back on the beginning of her life with her husband and see the disease.

The next year would be one of progress and hope fighting the disease. The second year would be one of struggle. The cancer mutated, became immune to treatment and grew back rapidly. It spread through Erica's blood and bone marrow, ravaging her body. Erica never stopped fighting, even when she knew the cancer would end her life. She became an amateur photographer, taking pictures of her dogs and chronicling the simple moments in life she treasured. She never stopped demanding her young husband keep living, both with her and beyond her life.

Erica didn't want her family to wallow or pity her at a dour wake. She asked her husband to throw a party to celebrate her 30 years of life. She wanted to be defined by the optimistic life she lived, not the horror of the cancer that claimed her. She died on December 7, 2011.

\"It was near Christmas,\" recalls Dave. \"The whole house was decorated to the nines. We rented a burger truck, and we took pictures of everything.\"

The 300 pictures on Erica's camera chronicled her funeral, her party at their house and her loved ones as they said goodbye. Dave tried to keep the promise he made to Erica, to celebrate her life with their guests. After he buried his wife, Dave put the Canon camera away, neglecting to download the pictures. He would do that later, he thought, after time soothed the gut-wrenching and overwhelming grief.

A year later, burglars raided his home, stealing the last images he had of his wife's life and the day he said farewell.

Santa Ana robbery detectives Paul McClaskey and Jerry Verdugo estimate that 5% of their cases are resolved with the stolen items be returned to their owners.

McClaskey was about to get one of the coveted 5% resolutions after a crime victim phoned the police department.

The \"Find my iPhone\" app on a victim's phone had just pinged, tracing his stolen desktop computer to a Santa Ana apartment. When the detectives arrived at that apartment, they found David Aguilar with the stolen computer. Santa Ana police say Aguilar was on probation for residential burglary.

As McClaskey began searching their apartment, he saw \"pawn slips in a stack in his living room,\" he says. McClaskey and Verdugo went to the pawn shop and tracked down some two dozen items believed to have been pawned by their suspect.

The officers began to input the serial numbers of the recovered electronics, many of them cameras and tablets, into a national database where police departments report victims' stolen items. None of them came back as stolen, which isn't unusual because most victims don't keep track of their serial numbers.

McClaskey began to turn on the devices, most of which were dead. The Canon camera, however, turned on.

\"I can't remember what the first photograph was,\" he says. \"But I remember initially the photographs that came up, it appeared to be a sign at a wake, or memorial service. There were pictures of a neighborhood, a house, groups of people. The people didn't look like the suspect or his family at all.\"

He handed the camera to his partner.

\"As I started thumbing through it,\" remembers Verdugo, \"it was apparent that it was a camera that was special. There were photographs of a funeral, a female who had been recently deceased.\"

The woman who died was so young, Verdugo says. She was a beautiful bride, posing with her handsome groom, the idyllic photo propped next to her casket. \"It angered me,\" says Verdugo, \"because a thief was in possession of a person's personal property. My thought was, 'How are we going to find this person?'\"

The officers had no leads, just the images on the camera.

Verdugo has been a cop for more than a decade, many of those years in Santa Ana. Like most officers, he's driven up and down many of his city's residential neighborhoods. The city of Santa Ana is approximately 30 square miles of, at times, forgettable tract housing. It looks like many sprawling suburban cities in California, filled with beige stucco and pavement weathered by the ever-present sun.

\"As I was flipping through the pictures, I noticed a wall, that just... a brown wall, old-style wall,\" Verdugo says. \"We have hundreds of walls in our city.\"

But something about this unremarkable beige wall with no markings or graffiti jogged something in the detective's mind. He couldn't place it or say what the street name might be.

Yet Verdugo somehow knew. It was a wall on the northeast side of Santa Ana.

McClaskey shakes his head as he recalls his partner saying, \"I think I know where this neighborhood is.\"

It didn't take long to find the wall.

McClaskey couldn't believe it. The beige wall looked exactly like the wall in the picture on the stolen camera. How his partner got them here, he will never know.

Verdugo was too busy to wonder about that. He was looking for the blue house captured on the camera. The blue house was where the wake was held, he says. The officers drove up and down the street, holding the camera up and pausing at possible houses.

The detectives got out and started walking down the street. A woman was outside, tending to her yard. The officers asked her if any of her neighbors had been the victim of a home burglary. Why yes, she said. Her neighbor. His home was once blue, she explained, but had been renovated when his wife decided to update their entire home. The young wife died, explained the neighbor, before she could see the dark green exterior finished. The neighbor pointed the detectives to the house next door.

It's heartbreaking, explained the neighbor, that Dave lost his wife so young to cancer.

All in a day's work

The robbery division isn't the most glamorous section of a police department. The officers aren't depicted in prime time dramas. Their jobs are admittedly under-appreciated and at times thankless.

\"We all struggle in the morning to get up sometimes,\" says Verdugo. He pauses as he remembers meeting Dave. \"Yeah. That makes it worth it.\"

\"That made me feel really good,\" echoes McClaskey, grinning widely. \"Hey, we did a good job today.\"

\"I thought it was a joke at first,\" laughs Dave, as he recalls the phone call from the Santa Ana detectives. \"I had given up all thought of recovery.\"

Dave immediately recognized Erica's camera. \"On the strap was the shoulder strap protector Erica had hand sewn.\" It was white, with delicate blue and red stitching. \"That's one of a kind. Just getting that back was better.\"

Then Dave turned on the camera.

\"I was in shock,\" he says. All the pictures were there, including a dozen pictures the thieves accidentally took of themselves, in an apparent effort to either delete the pictures or take out the memory card. \"I couldn't believe how stupid the thief was. I didn't care. I was glad to have it back.\"

Erica's camera went from thieves to pawn shop to police department. In that year and through all the hands that touched it, the precious images remained.

\"I feel like someone was watching out for me, just to get it back,\" says Dave. He doesn't have an explanation for why the pictures came back intact or how the detectives were able to figure out where he lived. Ever practical, he leans on the knowledge that crooks are not smart. But there's also a feeling that a vital part of Erica needed to come home to him.

\"Yeah, I still feel like she still does,\" says Dave, about his wife looking out for him. \"It makes things easier.\"