Why? Sheriff wants to know reason for Colorado school shooting 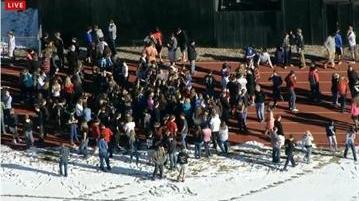 Centennial, Colorado (CNN) -- Police pressed their search for details Saturday explaining the apparent revenge that Karl Pierson sought when he opened fire in his Colorado school while seeking a faculty member.

Investigators have spoken with his parents and will search their home Saturday, but the person who could best answer the question took his own life Friday inside Arapahoe High School in the Denver suburb of Centennial.

Pierson, 18, wounded a student and then shot himself, authorities said. The faculty member was unharmed, and authorities aren't certain whether the student, a girl, was a planned victim or not.

Authorities have much evidence on what Pierson did and how he did it, Arapahoe County Sheriff Grayson Robinson said.

But a full explanation remained elusive a day after the shooting, which immediately took on greater meaning because it occurred on the eve of the anniversary of the Newtown, Connecticut, school shooting, the second-deadliest in U.S. history.

Several witnesses in the Colorado school saw and heard Pierson looking for a faculty member and discharging his weapon.

The halls of the school must have been crowded at the time, the sheriff said. But Pierson's shots hit only one girl, age 15. She underwent surgery and was in critical condition late Friday.

Her blood splattered on another girl, and police initially believed she had been shot, too. But she and everyone else were unharmed -- at least physically. Some of them were treated for panic attacks.

He credited the quick response time for the fact that Pierson stopped firing on others and turned his weapon on himself. Only five minutes passed from the time deputies received the 911 call that they were standing over the teen's deceased body, he said.

Robinson said earlier that first reports indicated a time of 14 minutes or less.