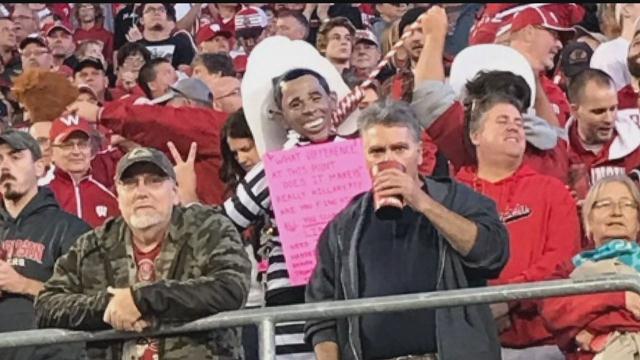 The University of Wisconsin-Madison has condemned the actions of two fans at Saturday night's Badger Football game.

A picture quickly spread across social media during the game showing a woman in the stands wearing a Barack Obama mask and a noose around her neck.

Twitter user 'whoaohkatie' first brought the costume to the attention of athletic officials by tagging the school in a series of tweet.

In a statement, university officials called the costume "repugnant" and added in all caps that the display was counter to the values of the university.

In Milwaukee, Angela Walker called the picture disgusting. She is the community campaigns coordinator for Wisconsin Jobs Now - a group heavily involved in social, poverty, and racial issues.

"I am born and raised in Wisconsin. This is my home state. My family is here. And I have never felt so unwelcome in my home state as I do now," Walker said.

"In what context would that be good taste to ever do?" Walker said.

She says - to the university's credit - they investigated the photo and would eventually ask the fans to remove the noose. Another video posted to Twitter showed the pair walking out of the stands while wearing a Donald Trump and Hillary Clinton mask.

But Stephanie Roades, involved with the group Showing Up for Racial Justice (SURJ), says something should have been done even earlier by other fans.

"You look at the people in the stands surrounding this incident. They're either smirking or completely disconnected, just hoping that if they ignore it, it will go away. But that kind of white silence is just another act of violence in that it's supporting these kinds of measures and it's complacent in these types of actions," Roades said.

Some Twitter users defended the costume as being a part of a Halloween joke. The wearers of the masks have not been identified and have not been located for comment.

UW-Madison officials said that the removal of the noose was voluntary and although they do not agree with the costume, they still respect the First Amendment rights of the fans.

Walker, however, said defending the noose as a joke is baseless.

"I mean, there was nothing ambiguous about what I saw," Walker said.