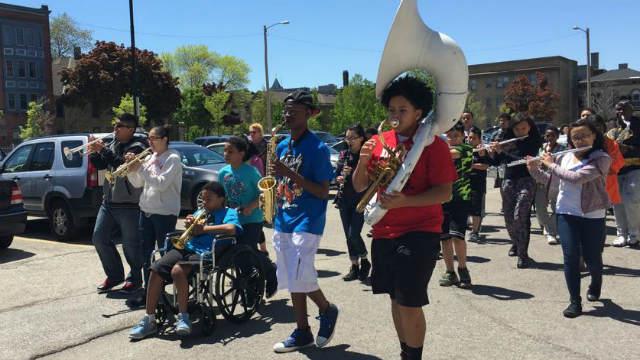 On Memorial Day, hundreds of people will participate in Milwaukee's downtown parade, but one group of students in particular will likely stand out in the crowd.

70 students from Lincoln Center of the Arts in Milwaukee have the privilege of being a part of the parade.

They've been practicing outside for about a month to prepare for the big day.

\"I'm so proud of how far the kids have come. I can't wait to see them in their uniform and on Monday, it'll be touching,\" said Kimberly Dueysen, the Director of Arts and leader of the Marching band at L.C.A.M.

Among the students, are two best friends. One of them, is Marquise Clay. A sixth grader with disabilities who is playing the trumpet. The other one, is sixth grader Mark Anthony Martin, who is not playing an instrument. His job, is simply to push Marquise's wheelchair.

\"He came up and asked me if I would push him in the parade and I said of course I can! This is what best friends do,\" Martin said.

With the help of a wheelchair and a very talented pusher, Marquise will now be part of his first parade.

\"I'm a little nervous but at the same time, I'm excited,\" Marquise said.

\"I'm delighted. I'm so happy for Marquise that he gets to be in the parade he really wanted to come,\" Dueysen added.

The memorial day parade will be held on Monday, May 25th at 2 p.m. in Downtown Milwaukee.