What's in the water? "Healing" springs may actually be toxic for some 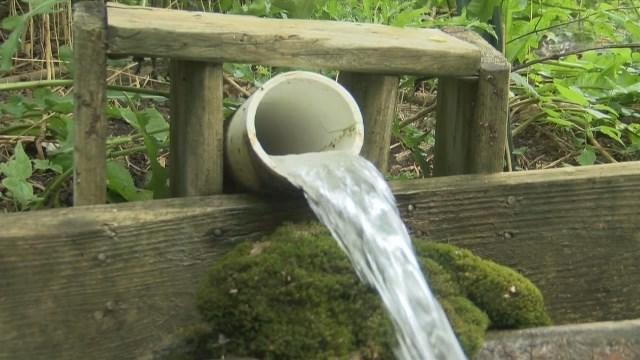 In the 1800's this spring water was bottled up and sold to people to cure their ailments. But now, the presence of bacteria and high nitrate levels have the Walworth County health department warning people to stay away.

Tilton has lived in Lake Geneva his whole life. He works for a lawn service and says he stops by Laughing Waters Spring every day.

\"We mow nine places in Como and stop here every week- it's great water,\" said Tilton.

People near and far come to drink this water, filling up by the jugful.

\"I use it for the garden. As you know it's been very dry and its a rose bud garden,\" said Mark Moore.

Claiming the artesian spring water is the freshest you can get.

\"I can't handle the city water, with all of those additives so I'll take the stuff nature gives you.\" said Moore.

People we spoke with say, they come here to drink this water because its cool and refreshing and comes clear out of the pipe. But the health department says there's  things in this water that you just can't see.

In fact, they've deemed the water unsafe for human consumption  after a lab report from June showed the water tested positive for coliform bacteria.

\"The EPA recommends that there be zero coliform bacteria in drinking water so following national protocol you would call it unsafe because there was some present,\" said Janis Ellefsen.

Janis Ellefsen with the health department says colfiorm is expected in all unfiltered wells and spring  water...  due to fertilizers and animal waste.

But what is most troubling is the  nitrate levels; they're nearly two times what naturally occurs in drinking water.

\"The level is over five,  which means no pregnant woman should be drinking that water.  It could cause birth defects to their unborn baby, especially in the early stages of pregnancy,\" said Ellefsen.

But this isn't the first time the county has deemed the privately owned springs unsafe to drink. It's been tested many times.

\"It's a story that comes up every ten years or so,\" said Ellefsen.

In fact, we got a copy of a letter from 2006, where the county advised the Lake Como Beach Property Owners association to post a sign about the dangers and restrict access to the well.

\"It's private property. All we can do is warn them,\" said Ellefsen.

Gene Decker with the association says a sign has been up since 1997, but that's not going to stop people from enjoying the springs.

\"I don't care what we do, even chaining the area off with a 10 foot high fence, we're not going to stop people from drinking the water,\" Decker said.

And the lab results don't matter the people we found at this watering hole.
Still health officials say, they're working with the DNR on new, more specific signage. Because, this is a risk that needs to be taken seriously.

The health department says there's no record of anyone getting sick from drinking the water, but they say, the best thing to do to stay healthy is to avoid it entirely.