What fate awaits 'Doctor Who' in the finale? 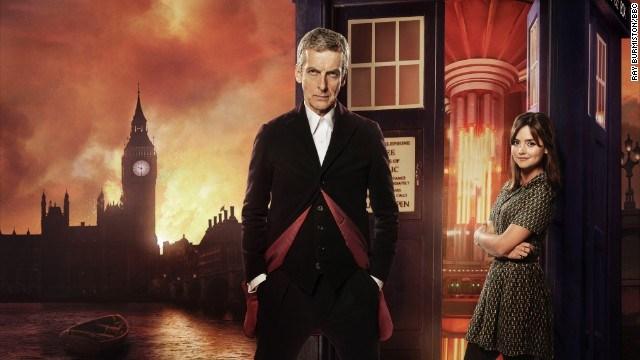 [CAUTION: Read no further if you're not up to date on \"Doctor Who.\"]

Some critics have called Peter Capaldi's first season as \"Doctor Who\" one of the best since the series relaunched eight years ago, and it looks like it's ready to go out with a bang.

Last week's episode had one of the greatest twists ever for a television show that started way back in 1963.

It wrapped up a story line involving Missy, a mysterious character who fans of the time traveling series had been seeing since the eighth season started.

Missy was revealed as the Doctor's arch enemy, the Master, having regenerated into a woman with a penchant for Victorian-era fashion.

This was just after the Doctor's companion, Clara, lost her boyfriend, who was in the Master's clutches.

So how will it all end this week?

It has been an emotional, thrilling season to say the least, and CNN spoke to Jenna Coleman (Clara) and Michelle Gomez (the Master) to get the lowdown on what to expect when the season winds down on Saturday -- and of course the big question is, will Coleman be returning for the ninth season?

CNN: First, I have to ask how it's been working with this new Doctor, Peter Capaldi.

Jenna Coleman: It seems to have been received really well, which is lovely. We love working together.

What it's done is it just keeps catapulting the story forward. It's nice because it's never had time to settle. The relationship between Clara and the Doctor this series has always been a rocky road. They're still finding their way. But they have this history -- she's met all incarnations of the Doctor, so they've got this bond that's unbreakable. They are really strong -- it leads to some good drama.

Michelle Gomez: I knew Peter through a mutual friend, and Peter and I are from the same part of Scotland in Glasgow. I felt like we knew each other as we share a friend. Coming from the same town, we have the same Glaswegian sense of humor. I remember sitting to his right in the read-through eating a banana, which he liked. We found each other funny, and that helped with bringing fun on the day.

Coleman: It's a very complicated relationship. It's really intricate but [Clara]'s so weaved through each of his lives. It's not a relationship you can compare to anything else, really. Ultimately they're best friends, kind of parent to one another, they absolutely annoy each other. It's a rich, really complicated relationship that I personally love. In theory, it shouldn't work -- he's an alien that's been alive for 2,000 years and she's a schoolteacher. Across all of that, they have a really strong friendship. Because it's so offbeat, it's really charming and unusual. Somehow, they belong together. That's what I really love about their relationship.

Gomez: Finally we have an age-appropriate Doctor -- I feel like I'm in safe hands. I feel that he's experienced with his age, maturity and wisdom. I love his attitude, his energy. I find him fascinating -- a multifaceted, contradictory enigma rolled into one. He's like David Bowie -- he's more rock and roll.

CNN: You have both played characters with big secrets - Clara was \"The Impossible Girl\" - have you enjoyed that?

Coleman: It's great to hear the theories and keep people guessing. Michelle's secret -- she's so bonkers and absolutely brilliant -- she's my favorite villain we've had in the show. Her and Peter are just so well matched together.

CNN: Do you get recognized by the fans?

CNN: What about the world tour this past summer?

Coleman: It was such an experience. Peter's family came and I brought my mom and dad. To suddenly, after all that work in Cardiff, to come out for some air, and to meet people who are so enthusiastic about the show and what they like and don't like -- it makes you excited to go back and film some more. We'd often be in a city for 30 hours. It was the closest we'd ever get to being in a band -- quite a strange band.

CNN: What can you tell us about what to expect in the finale?

Coleman: It's not what you'd expect. Clara keeps learning how to survive -- hopefully people will cry and be surprised. How general is that for you? [Laughs]

Gomez: Even I don't know what's happening. We have three different endings, and I have no idea what they're going with -- I'm just as excited as everyone else to find out how it turns out.

CNN: Will we know at the end of the episode if you're returning to the show?

Coleman: That is how it's gonna work. There's been a lot of secrets this year -- for the sake of [executive producer] Steven [Moffat]'s brilliant storytelling -- it's so good to keep people guessing. Back to my first episode, \"Asylum of the Daleks,\" the fact that that was a surprise; it was good to get that shock factor. It's gonna work out so much better to watch it and see what's gonna happen. We're teasing it out, basically.

CNN: And finally, a fan on Twitter asked Jenna: Given that you've been in \"Captain America: The First Avenger\" and \"Doctor Who,\" would you ever play a superhero given the chance?

Coleman: I'm buddies with all the superheroes. [Laughs] Depending on what it was, it would be an awful lot of fun. Clara gets her share of heroic moments, and gets to do stunts. Even though she is just a schoolteacher, I'm getting my fair share of action stuff. If it's a good story, then that's great. I'd like to do something quite theatrical -- I'd like to do something bold and big.