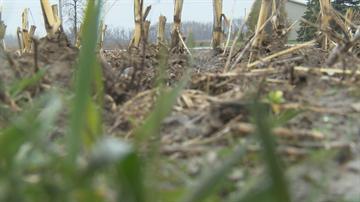 SHEBOYGAN FALLS -- In the best weather, you'd see farmers seeding their fields across Wisconsin right now.  Instead, the tractors are stuck inside with each passing day potentially hitting you in the wallet.

\"We can make a lot of headway in a hurry, it's just Mother Nature has to cooperate,\" farmer Jim Kroeplien said.

But Mother Nature doesn't seem to want to play nice for Kroeplien.  He runs a family farm in Sheboygan Falls, growing corn, beans and alfalfa on 750 acres, but he needs the soil to get above 50 degrees before he can start planting.

\"I don't know of anybody that's pulled a corn planter out of the shed,\" Kroeplien said.  \"To me, that would almost be foolish because the ground temperatures are so cold.\"

Typically this year, Kroeplien's fields would have at least some corn seed in them.  Right now, they're just piles of uneven mud.  It could stay that way for another month.

\"When the weather does break, we're going to have to go 24/7 and live on three or four hours of sleep for a week,\" Kroeplien said.

Ballweg has seen worse starts to the growing season, but he knows if the weather doesn't improve farmers like Jim won't  have much to work with.

\"If we have lower yields we have less revenue, so at the end of the year the margin is left less and the profits are less,\" Ballweg said.

That could mean higher prices at the supermarket and farmers spending less on tools and machines.

\"A lot of times those jobs at the manufacturing facility are filled by people that live in cities, so what happens in agriculture has a tremendous impact on the entire economy of Wisconsin,\" Ballweg said.

While farmers wait for the weather to turn, Kroeplien plans to keep his head up.

\"You just gotta roll with the punches,\" the farmer said.  \"Maybe we'll catch a couple good years in a row.\"

Kroeplien tells CBS-58 News once the weather improves, his planters can seed up to 300 acres a day.