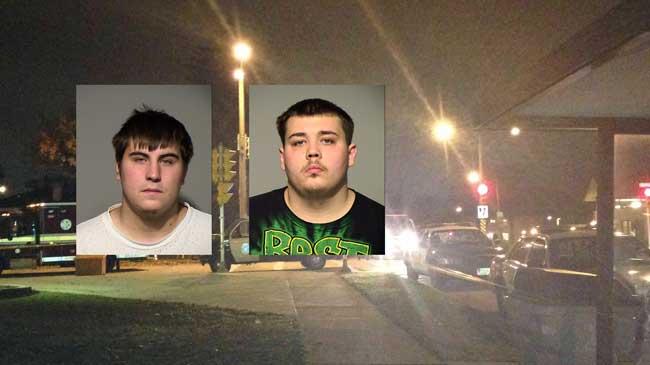 Troy Tiedke and Dominik Czerwinski have been charged in the fatal hit and run of Reena Ramazini on November 5 at 1950 West Bolivar Avenue.
Tiedke has been charged with hit and run resulting in death and knowingly operating a motor vehicle while suspended - causing death.
Czerwinski is charged with harboring or aiding a felon.
Milwaukee Police were called to the scene of the accident by Ramazini's boyfriend, according to the criminal complaint. He said she was in the street trying to record the registration and plate number of an SUV.
Czerwinski's girlfriend, Star Boots, told police she was in the rear seat of the car the night of the incident.

The night of the fatal hit and run, Tiedke was driving the vehicle. One of the two defendants threw a container of soup out of the vehicle onto a parked car.

The person sitting in the parked car began following them.  Boots saw a female in front of the truck and Tiedke slammed on the brakes and turned the wheel. Boots said she saw the SUV strike the woman. According to the criminal complaint "Tiedke simply drove off.

A witness told police he witnessed Ramazini run across eastbound lanes of Bolivar Avenue and into the westbound lanes.

The witness observed a white SUV heading towards her and then striking head on.
A different witness approached police the next day on the 1600 block of West Whitaker and told them the defendants lived in the neighborhood. He said the defendants were known for driving recklessly and drove a white four-door Ford Explorer.
The witness went on to say that on November 5 he observed Czerwinski driving at an excessive rate of speed eastbound.
Czerwinski Leads Officers to a Garage
On November 6, Czerwinski led officers to a garage located at 7283 South 51st Street in Franklin. At the location, he showed the officers the SUV. The Ford had front end damage consistent with striking a pedestrian .
Boots said Czerwinski had the idea to park the truck in a garage in Franklin.
Boots told police, Tiedke then said, "We have to take this to the grave."
Czerwinski told police Tiedke tried to brake and swerve but the woman jumped in the same direction as Tiedke turned.
Tiedke left Milwaukee County the morning of November 6 and went to Door County to stay in his grandfather's condominium.
Tiedke turned himself in to police on November 7.
Tiedke's driver's license had been revoked on February 11 for failure to pay a fine.
Share this article: