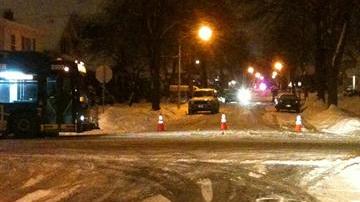 Armored trucks and police with guns drawn surrounded the area. Several streets were blocked off.

Police responded after receiving a report of a disturbance at a home involving a male with a gun.

Some neighbors were forced out of their homes and waited on a nearby bus to keep warm.

Other neighbors peered out windows as police surrounded the block.

Police were able to make contact with the man and took him into custody without incident at 9 p.m.