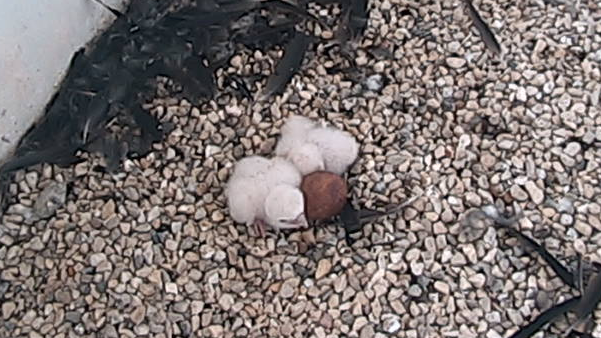 We Energies announced the names and winners of the falcon naming contest.
Melissa Barbieri of Muskego chose the name Hecate (pronounced HECK-uh-tee), for the Greek goddess of justice. “The goddess was the patron of justice for the wronged and also the patron of the crossroads, which is where the falcons were before we decided to help,” says Barbieri. “I think this name is a testament to humanity righting a wrong in the world.”

Sara Martinez of Milwaukee chose the name Squid as a tribute to her brother, Dennis “Squid” Falcon, an Iraqi war veteran. “My brother came home honorably discharged from the U.S. Navy, diagnosed with cancer,” wrote Martinez. “After he beat his illness, he was hit on his bike by a drunk driver and should’ve died. He fought like only a falcon could.” So why “Squid”? It is a common nickname for sailors in the U.S. Navy. And it also helps that Dennis' last name is Falcon.

We Energies received approximately 200 entries in the naming contest. Originally, the winning names were slated for the chicks at our Valley Power Plant in downtown Milwaukee. Unfortunately that nest site failed this year. The four eggs that were laid never hatched. So, Hecate and Squid will be reserved for the two chicks born at our Port Washington Generating Station. Martinez and Barbieri will get to meet the chicks in person when they receive their wildlife bands.

The chicks will be band on May 24.