Wauwatosa pet owners arm themselves for protection against wild coyotes 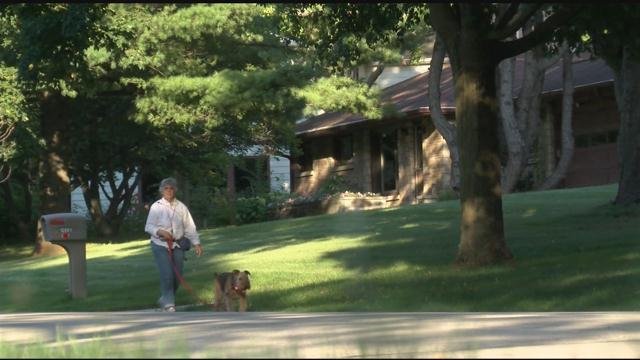 Evening walks for Kit Hansen and Libby, her seven-year-old rescue dog, have changed.

"I've never carried a walking stick before," she said.

But she's armed with one now and a whistle. Both are protective measures to fight off a wild pack of coyotes lurking around the woods along Underwood Parkway in Wauwatosa.

Hansen said she can here them at night.

In one week, Wauwatosa Police said two dogs have been mauled and killed by a coyote.

Concern is so high, neighbor John Schwab is considering carrying a shotgun.

"It's not illegal to carry a shotgun and shoot for self defense," he said. "I'm not hunting, but protecting ourselves."

He said the DNR needs to use sharp shooters and set traps to take out the animals. But Tosa Police say the urban environment makes those possible solutions difficult.

"I'd rather see four dead coyotes than one dead person or anymore dead pets," said Schwab.

According to experts, coyote attacks on humans are rare. But the fear of the unknown has a grip on the people who call the area home.

Hansen can't imagine anything happening to her pet and would go to any lengths to keep her safe.

"It's not in me to do it, but if it came down to me and Libby, I guess I might go back and get a concealed carry and training again," she said.

Wauwatosa Police are working with the DNR to find a solution to this problem. Residents who see the coyotes are advised to make loud noises to scare them away.