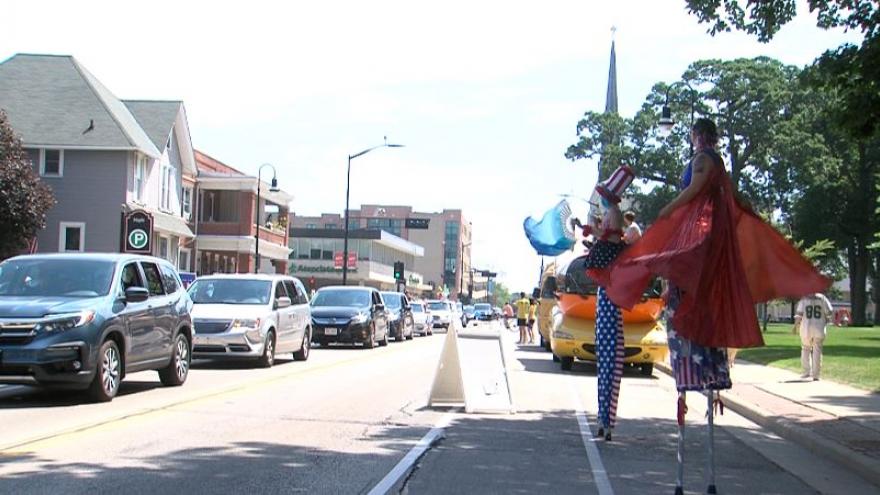 WAUKESHA, Wis. (CBS 58) -- It's been a year filled with new ways to celebrate holidays, and the Fourth of July is no exception. On Saturday, July 4, Waukesha held a new kind of parade.

"We're calling it a 'reverse parade' today. All of our units are stationary. Normally, they would move down the route, but today they're parked and we will have the public drive through the parade today and enjoy the floats from their cars," said Joanna Adamicki, special events coordinator for the city of Waukesha.

There were about 16 units total, which included floats, bands, people dressed as bronze statues, the Planters Nutmobile, the Wienermobile and stilt walkers.

"On a normal parade, people will be shoulder to shoulder on the streets, and so that we just couldn't do. We have a limit of 100 or less (people) right now in the county, so we thought this was one way to still enjoy the Fourth of July and a smaller parade but still remain separate from the public," Adamicki said.

Families decorated their cars and enjoying the attractions in their air conditioned cars as they drove through the parade route, which went around Cutler Park.

"Everybody's in their own cars, so we're in like our own little bubble. I think it's great instead of having thousands of people lined up on sidewalks close to one another," said Debra Valdivieso, a Waukesha resident and member of the Army who is currently stationed in El Paso.

As a member of the Army, she understands the importance of Independence Day.

"The Fourth of July parade is just something you've always got to do, and now you have to do it a different way. You have to make it safe," said Valdivieso, who drove through the parade route with her 7-year-old son.

People who live along the parade route even showed their holiday spirit to the cars driving by their homes.

"I recognized a few of the people in the cars," said Elyssa Touchstone, as she and her family waved.

And of course, no parade would be complete without some sweet treats. Parade organizers had 1,000 goodie bags filled with candy to hand out to the children in the cars.

Waukesha city officials canceled the fireworks show this year but said they look forward to resuming their full festivities in 2021.