Waukesha shuts down electronics recycling due to growing pile 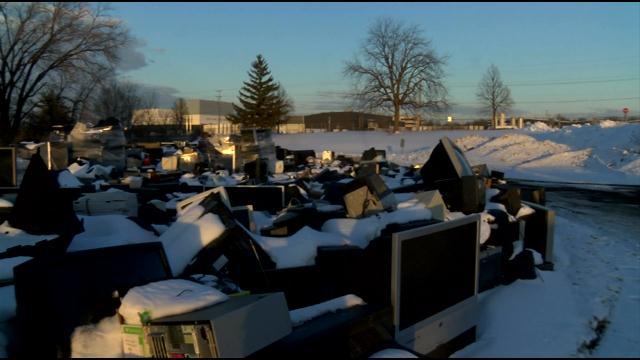 If you got a new TV for Christmas, or upgraded for the Super Bowl, you may be out of luck trying to get rid of the old one.  The City of Waukesha's free electronics disposal lot won't accept any items for the foreseeable future.

\"We have accumulated a lot of them,\" Recycling and Solid Waste Coordinator Dustin Nolan said.

Hundreds of old TV's, VCR's and computers, all discarded in the Sentry Drive drop off center since Thanksgiving.

\"Black Friday and the Christmas holiday, we had a lot of new, well, old electronics come to us,\" Nolan said.

The city started accepting old electronics about ten years ago. Normally, a company comes and takes them away, but lately the city's new firm, 5 R Processors, based in Ladysmith, hasn't been able to keep up with demand, meaning Waukesha's pile is stuck.

\"In the last six months to a year, we've gotten overwhelmed by the volume,\" Nolan said.

The pile's gotten so big, Nolan now must turn people away -- a problem just about every municipality in Waukesha County faces.

\"It is a frustration and we appreciate the patience of the residents,\" Nolan said.

But state law, which passed in 2009, says you can't just throw old electronics in the garbage, which means people are turning elsewhere, like Best Buy.

Walter says at least a dozen people every day bring old items in to his store on Bluemound Road in Brookfield.  The store takes the items free of charge.

\"We've had the fortune of selling a lot of electronics to the community and we're really proud to provide a place where people can take them when they're no longer needed,\" Walter said.

It's a service Dustin Nolan hopes to be able to provide again soon.

Waukesha is currently gets and provides that recycling service for free, but the city may consider switching to a company that costs money, which could mean residents will have to start paying too.  Nolan says he'll meet with the DNR, other Waukesha County municipalities and the City of Milwaukee to resolve the issue hopefully by spring.