WAUKESHA, Wis. (CBS 58) -- After a two-year hiatus because of pandemic cancellations, the Waukesha Memorial Day Parade returns this holiday weekend. It also marks the return of major downtown parades for the community after the 2021 Christmas Parade tragedy.

"I'm glad that they're going to have it to try to get past what happened," Cheryl Krueger of Waukesha said. 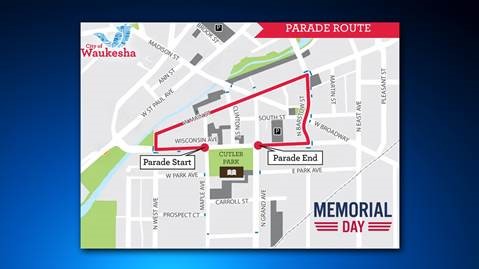 The parade route will have a closed perimeter using a combination of vehicles and new mobile vehicle barriers -- or MVBs -- to secure the route.

The MVBs were purchased by the city earlier this year and are designed to stop motor vehicles from getting through.

No parked cars will be allowed on the parade route, a restriction that has always been in place for parades and major events downtown, but in years past, the city would leave the vehicles where they were. This year, they will enforce the restriction by towing any vehicle left parked along the parade route.

The measures in place bring peace of mind for those considering attending the parade.

"I'm glad that they're going to be having extra security for this," said Carla Friedrich of Waukesha.

Event organizers believe the parade is something the community is looking forward to in order to start a new chapter for major events downtown.

"I certainly have empathy for the situation but I have to say that the community, from my perspective, seems like they're anxious to have a parade and move on," said Patrick Craney, chair of the Waukesha Allied Veterans Council and a Vietnam War veteran.

Craney told CBS 58 the parade can help the community heal and unite. He also expressed hope for people to take time to recognize the meaning behind the holiday.

"Memorial Day for me is very personal because in the time that I was actually in the field which was most of the time, I lost several friends or fellow soldiers and it's something you don't really forget," Craney said. "I think about it all the time."

What to know if you're going to the parade

The following is additional information regarding the Memorial Day Parade from the City of Waukesha:

A River Service will take place at the Lee Sherman Dreyfus State Office Building, 141 N.W. Barstow St., Waukesha, at 9:00 a.m., followed by the parade at 10:00 a.m., concluding with a program that will include a performance by the Waukesha Civic Band at 11:00 a.m. at Cutler Park.

No parking signs will be posted on impacted streets on Sunday evening, May 29. No vehicles may be parked along roads inside the parade route perimeter starting at 7am Monday, May 30th (please view parade map). If vehicles are parked in the secure parade perimeter they will start to be towed beginning at 7am on Monday, May 30.

Roads will be closed for the parade starting at 9:30 a.m. on Monday, May 30th. After 9:30 a.m., no traffic will be able to enter or exit the parade perimeter until the conclusion of the parade, which is expected to be around 11:00 a.m.

For spectators coming to the parade, you will need to park using street parking or city parking lots outside of the parade perimeter and walk to your viewing location.