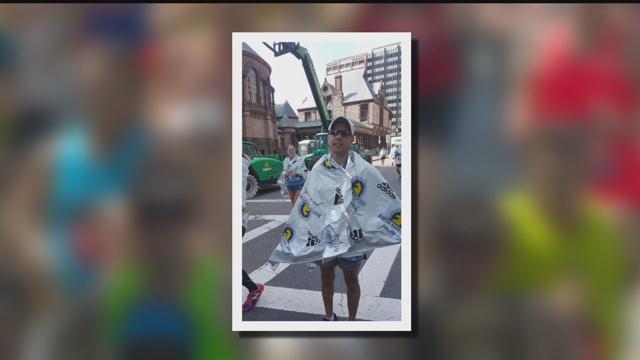 A Waukesha man crossed the finish line at the Boston Marathon on Monday nearly 20 years after being diagnosed with Multiple Sclerosis (MS).

The accomplishment caps a longtime goal for the restaurant owner whose staff says they couldn't be more proud.

44-year-old Tony Marquez, owner of La Estacion Restaurant in Waukesha, finished in 3 hours, 59 minutes, and 19 seconds. That's a little off his goal pace but the people who know his story say the accomplishment shouldn't be understated.

"He's the best guy that I meet and a great, great owner," manager Samuel Salino said.

He's also had a great recovery revealing to workers the MS diagnosis that left him partially paralyzed almost two decades ago.

The Boston Marathon became a goal after relearning how to walk without a cane and training for years to get to this point.

"No I didn't know until he started signing up for the Boston Marathon. And that's when he gave me more of his history about the MS and I was just shocked," Rudolf said.

"I think that Tony's a very strong person. I mean, having to go through that and then getting back up and like training everyday - I'm pretty sure that was his goal and I feel very proud of him," server Rebeca Hernandez said.

Marquez says the spectators of the marathon helped him complete the race which got difficult around the halfway point. He says fulfilling the goal feels surreal.

Marquez also fundraised about $5,000 for organizations dealing with MS during his lead-up to the race.