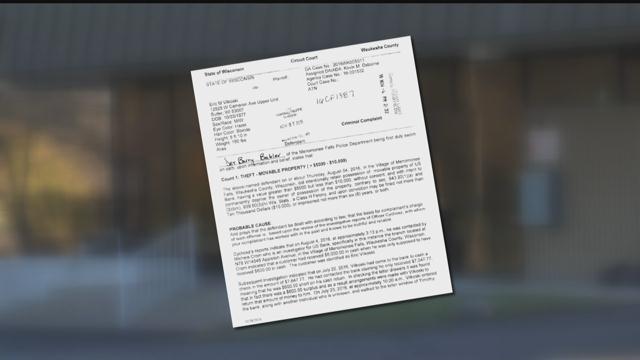 A Waukesha County man is charged with stealing from a bank, after the teller gave him the wrong amount of money, twice.

In July Eric Vilkoski walked in to this Menomonee Falls US Bank to cash a $7,647.77 check. According to the criminal complaint, the teller shorted him $600.

Vilkoski noticed the error when he got home and called the bank. The complaint states "in checking the teller drawers it was found that in fact there was a $600 surplus."

The next day Vilkoski went to get the rest of his money, but this time the teller gave him too much money: $6000 instead of $600.

The complaint states video footage shows Vilkoski and the man he was with, glance at each other as the teller counts out the money "without making any statement that [the teller] exceeded the correct amount."

A few days later, a US bank investigator called Vilkoski about the error, as police listened in on the conversation. At first Vilkoski denied he got more than $600. When he did admit to getting $5400 more than he was entitled, he pointed out it "was the bank's mistake, and not his," and said "most of it is spent, I paid bills."

Now Vilkoski is charged with felony theft and faces up to six years in prison. He will make his first court appearance on November 21.

A spokeswoman for US Bank declined to comment on what happened, other than to say the teller involved in the mix up is no longer an employee.