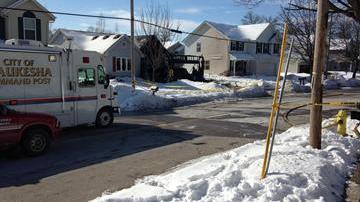 WAUKESHA -- Police kept the 1000 block of Motor Avenue closed to traffic much of the day Saturday as crews continued an investigation from a Friday night fire.

\"I came down and I saw flames coming out and I was like, 'Oh no,'\" neighbor Isaac Krajcik said.

\"Outside of the window I saw the sky was orange,\" another neighbor, Lisa Andrews, recalled.

Firefighters responded to the home just after 9:30 p.m.

\"It wasn't pulsing heat, but it was definitely warm and it was very fast burning,\" Andrews said.

\"The house was fully engulfed and neighbors were there trying to break out windows to get ventilation to the fire, so the fire department had their hands full,\" Waukesha Police Sergeant Jerry Habanek said.

Crews got the fire under control quickly, but stayed on the scene long into Saturday.  The state Fire Marshal's Office called for the State Patrol's incident reconstruction team to help gather evidence.

\"When you have a fire like this, the fire and the evidence itself is not contained to the house itself, it spreads throughout the neighborhood,\" Habanek said.

Investigators say the burned man was the only person injured and believed to be the homeowner.  But they wouldn't say if the fire was suspicious.  A check of that homeowner's criminal past shows an unresolved case with felony charges of capturing nudity and misdemeanor drug charges.

\"I don't know that I've ever even seen [the victim],\" Andrews said.  \"He evidently keeps very much to himself and is just not somebody who is friendly to neighborhoods.\"

Neighbors passed rumors of drugs on to each other throughout Saturday.  Andrews hopes there's no truth to them.

\"If it's something untoward, I want to make sure that I'm safe and my neighbors are safe,\" Andrews said.

Police have not yet released the victim's name, but do say he is in critical condition.